Warning to the non-knitter this is a very knitterly post, but further examples of my character flaws will be included in the post which may be entertaining. This is about my Clapotis (http://www.knitty.com/ISSUEfall04/PATTclapotis.html ) and for a non-knitter this project has become like a rite of passage for a newbie knitter. In this project you learn to increase, decrease, pull out stitches and in general knit something pretty that actually has very little purpose, but to look fetching. 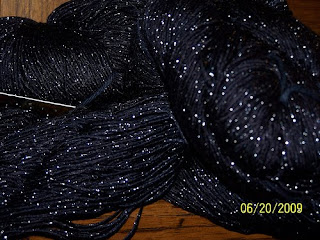 My problems started when I found this lovely metallic rayon yarn in aubergine and silver by Blue Heron Yarns (http://www.blueheronyarns.com/ ). I fell in love with yarn and knew I had to have it for my own. I could see myself wrapped in it like the Queen of the Night from the Magic Flute. The yarn was bought and went into my stash. Occasionally, I would take the yarn out and stroke it sometimes imagining the lovely garment that it would produce. Time and other projects kept me from my desired object.

At last this July the time was upon me. No more sock classes, no more baby items to knit only me, the Blue Heron Yarn, and the pattern for a Clapotis. A friend had actually made one a little larger than the pattern called for and of course I had to knit the supersized one too. After much thought, advice, and a few mis-starts I was on my way to project obsession. Like a relationship I took my project bag with me everywhere. I stayed up until the wee hours of the night knitting. The Clapotis was the last and first thing I would think about in a day. I was Glenn Close and my Queen of the Night Clapotis was Michael Douglas. Folks it was not pretty.

On my way back from Bethel I had the boiled bunny moment. I had more pattern than yarn with about seven inches to knit. I was surrounded by master knitters when the melt down happened. They were very gracious about my predicament. I tried to control myself on the outside, but internally I was going done in flames. I felt betrayed by my yarn, the pattern, and my own overwhelming desire to supersize everything. 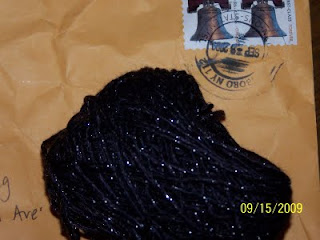 But all was not lost, I went to Ravelry, my one stop virtual knit network. I stalked others who had also used the aubergine/silver Blue Heron metallic rayon yarn for projects. I targeted people who had finished projects made with my beloved yarn. I sent out the call of distress, begging for their leftover yarn. I only needed about 2 oz. of the yarn and hoped for help. Out of about a dozen emails, four wonderful knitters replied. Aggie from Brooklyn was my knit hero extraordinary. She sent me the perfect amount of yarn. She refused to accept my offer to pay and even sprung for the postage. I am not worthy, but my now finished Clapotis is. 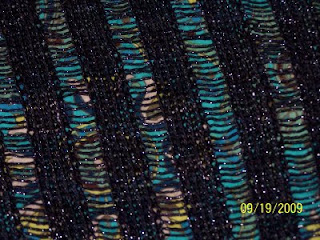 I also found where I went wrong, I had put in one too many increases and one too many length repeats, major opps. However, all those sins are in the past. My beautiful Queen of Night Clapotis is done and it is love, much love. 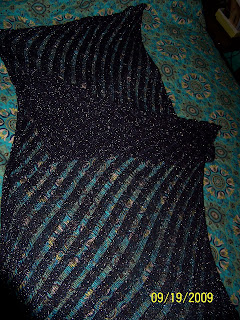 Posted by Tempest ina Pot of Tea at 8:27 PM No comments:

Clapotis done!
Posted by Tempest ina Pot of Tea at 4:39 PM No comments:

I can't believe i am @ another cardinal baseball game. Stitching & pitching this will not become a habit. Baseball that is.
Posted by Tempest ina Pot of Tea at 7:46 PM 1 comment:

Hannibal is Not Just Some Guy With Elephants

I admit I have issues with nostalgia. Sometimes I do things just to try to recapture the magic of my youth with varying success. Things like visiting Onondaga Cave and going to a baseball game with my high school sweetheart get big pluses. Things like eating unbaked cakes and visiting the town I grew up in not so much. But still I find myself drawn to places I have been before and in some ways recreating the experience I had as a child. Hannibal Missouri just so happens to be a childhood memory lane destination. 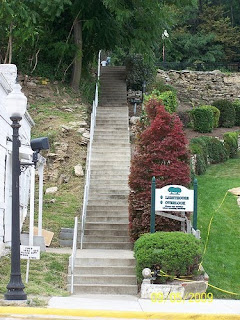 I went to Hannibal as a girl scout and even earned a badge for my efforts. I think the one thing that has stuck with me from that trip was the climb up 184 stairs to a lighthouse which overlooked Hannibal. I have so few good memories of my younger sister and I, but this is one of those memories. It was something we did together and at the end we both got little gold cards proclaiming our prowess at achieving such a feat. I even think I might still have my card stored away somewhere. So while at Hannibal this weekend I thought I should climb those steps again just to prove I could. 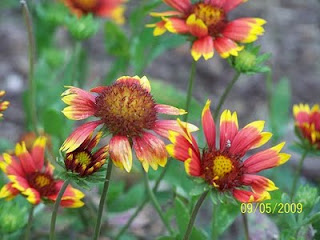 I have made it a point to climb to the lighthouse in Hannibal everytime I have been there so this will make (by my reckoning) the fourth endeavor to do make the ascent. My friend Fiona decided to join me on the trip and we headed up with our cameras in tow. Neither of us rushed the trip as we stopped to photograph flowers and river vistas. As we got closer to the top it got a little harder to steady my hands to hold the camera as a wheezed my way closer to the lighthouse. 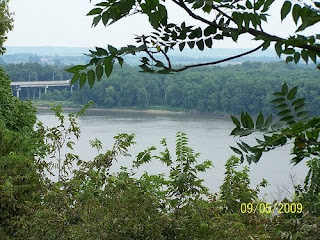 Somewhere about thirty steps from the top I just about melted in a huff and puff of sweat. The lighthouse seemed miles away and I could not even gasp for help. After several moments of agony I forced myself to the top and immediately collapsed on a bench. At one point I wanted to send Fiona back down for oxygen, but I survived. I got in some nice shots and gave myself an attagirl. Fionna and I headed back done the winding stairs stopping at the little gift shop at the bottom for our award in completing the task of climbing all 244 stairs. 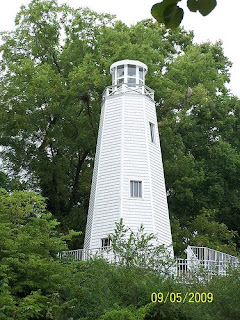 WAIT! 244 stairs! Who added 60 stairs on me? No wonder those last set of stairs about did me in, they were never there before. The woman at the gift store said in 2000 they re-did the stairs and discovered they needed more stairs. Wow! I am getting better with age, I can climb even more stairs than I could at 11. Granted not very gracefully, but hey I am about results, result no heart attack. I still got it.
Posted by Tempest ina Pot of Tea at 6:52 PM No comments:

Sheepy Thoughts or Why I Will Never be a Shepherdess 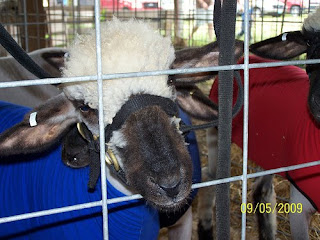 Lamenting the annoyance of having to work all day when I would rather be knitting, a co-worker suggested I buy a farm and some sheep, live off the land, spin my own yarn, and sell sheepy goods out of the back of my truck at the local farmers' market. For half a second that sounded like a dream and then I thought, "Oh yeah I would have to move to the country." I moved on and really did not give that plan another thought until last weekend. In the company of other fiber-minded friends I went the Bethel Sheep Festival in northeastern Missouri. I have been to the festival before, and enjoyed the event long before I ever started knitting. Going now is extra special because the booths of yarn and knitting accessories actually capture my attention and spark my imagination. The yarns are also exceptionally intriguing, because of course they make me want to knit amazing garments, blankets, and scarves all day instead of going to work.
Looking around at all the farmers and crafters with their handmade items and beautiful displays, I thought, well maybe... My cats and I could take off to some rural route, I could get angora goats. The goats would give me fiber and milk . I could learn to spin, dye, and even weave cloth. I could become an earth mother spreading wisdom and handcrafted cheese wherever I went. 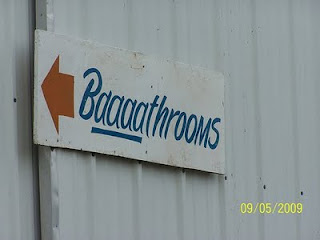 As my mind reeled with thoughts of my getting back to nature, I wandered over to the livestock area and remembered why I live in the city and eschew my country roots. It was the smell, that overwhelming scent of manure was more than I could handle. My nose scrunched up and I remembered growing up next to a pig farm. Yuck! Give me a ripe dumpster anytime over that stench. Yep, I am Lisa Douglas after all. 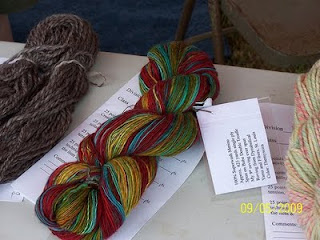 As an aside, the festival was nice, I spent money. Bought some Christmas presents, had an awesome carmel apple, watched some amazing border collies do their job, and saw some beautiful hand crafted items. Even my friend with Dyeabolical Yarns (http://www.etsy.com/shop.php?user_id=5101528) was represented with some of her roving beautifully spun up into yarn. See above photograph of said yarn. The festival was great, but you won't find me there anytime soon hawking my own hand spun, organically dyed angora yarn. 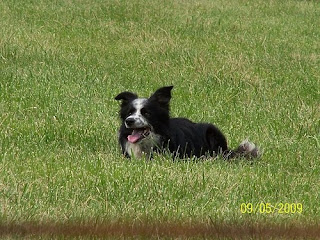 Out of blue heron yarn, not out of pattern. Anyone have some bh laying around i can have?
Posted by Tempest ina Pot of Tea at 6:33 PM No comments: