Trying to Love Hats, or What I Have Been Knitting

You know I have been whining about knitting hats.  I have complained endlessly about not getting the nuances of making a well fitted hat.  I have even taken to calling knitted hats, hates.  But with Nietzche ringing in my ear, "Was uns nicht umbringt, macht uns stärker" or in English, "What does not kill us makes us stronger," I have knit on in the land of hats. 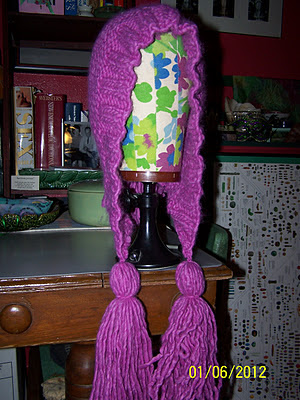 I fell in love with a be-tasseled hat pattern called Capucine, remarkably the first pattern written by a new knitter, (http://navlne.blogspot.com/2009/12/knitting-pattern-capucine.html) and decided as soon as I could I was making me one of those crazy toppers.  Anything with excessive tassels has to be mine.  I made three of these over the top things out of alpaca and alpaca blend yarns.  The pattern was fun and making tassels is never a chore so these were done in short order.  Granted I have only one head so wearing all three of them at time would be difficult so I am giving two of them away to people who I know will wear them with dignity and pride.  Or should I say with the crazy abandon those kind of tassels deserve. 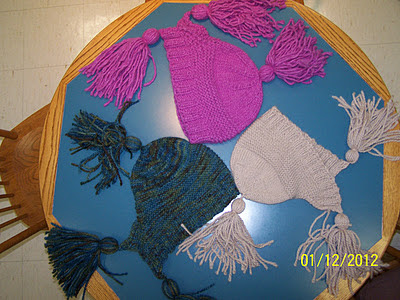 I then had a Boho Beret pattern (http://www.ravelry.com/patterns/library/boho-beret) that I wanted to knit for a birthday present.  This pattern started with the yarn.  I had the yarn to match a scarf I made as a Christmas present (see not so straight scarf: http://tempestinapot.blogspot.com/2012/01/end-of-year-knitting-wrap-up.html).   Ravelry (my favorite social network) has an awesome feature where you can look at pattern suggestions for yarn and I found the Boho Beret design.  Again this pattern was some much needed fun knitting.  I really loved that the beret is wide at the top to accommodate big hair.  When I finished the beret I wanted to knit another one, but stopped myself with the thought that I will knit another one later.  I gifted this brightly colored beret and it was well received accept she wanted a pom-pom instead of a stem.  I had to tell my friend, I DON'T do pom-poms, ever.  You can quote me on that if you like. 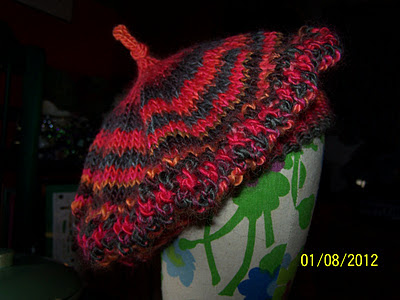 Finally, last week with my three day weekend, I decided to treat myself to a hate, I mean hat, of my own.  I checked out a book from the library (my library, not the one I work for).  I was attracted to the title, Stashbuster Knits by Melissa Leapman.  The book was full of hints for projects of the stray ends of yarns.  One project was the Urban Knitser Slouch Hat.  I saw the pattern and thought hey I have some left over yarn from the Capucine-apalooza which would make a lovely Urban Knitser Slouch Hat. 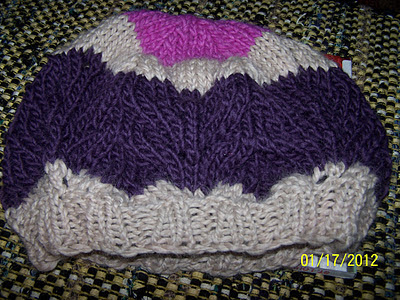 I would like to say that knitting this pattern was fun and as the pattern says, "You can easily knock it out the morning of a bad-hair day."  Sorry Melissa Leapman, but that was just not the case for me.  It took three days and two trips to the frog pond of rippit out.  The size 9 needle band was too tight, and the size 10 needle too loose.  In the end I went with the 10 needle and decided loose was better than too tight.  I also used up my scraps and needed more so back to the bowl of scrap yarn I went and came up with a very bright top.  The hat turned great and with the cold weather I have worn it all week and loved it.  I wore the hat Friday to work with one of my tie dye t-shirts and a co-worker called me a hippie.  Yikes that was not really the look I was going for, maybe it was the t-shirt?  Okay, I hope it was the t-shirt and not the hat. 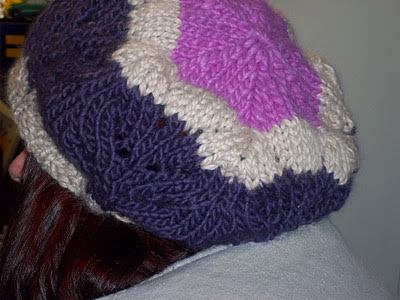 When all is knitted and done, I am still going to call hats, hates, but I will say it with love.
Posted by Tempest ina Pot of Tea at 3:11 PM 2 comments:

I don't watch shows about hoarders, because it strikes way to close to home.  However, I caught the last 5 minutes of one of those shows tonight, just enough to catch the happy ending.  The woman had placed a sign on her kitchen wall to encourage her to not hoard.  I was amused because the sentiment is in fact my New Year's resolution.  The sign read, "Find joy in your journey."  I guess you never know where you will find inspiration.
Posted by Tempest ina Pot of Tea at 9:34 PM 2 comments:

Trying to Enjoy the Journey Tested

My New Year's resolution this year was to focus on my journey, not the destination.  However, Thursday morning I was sorely tested.  It snowed in the wee hours of Thursday and we had maybe an inch or so of accumulation on the roads.  I had heard the forecast and thought I should leave early to make it to work on time.  I left over a half an hour earlier than usual thinking I would not be late.

First fail was one of the highways I take to work was closed, as in no access, only surface roads for me.  I skipped two of my three interstates going for highway 64.  Second fail, after two minutes on 64 everything stopped, and I do mean stopped.  It ended up taking me an hour to go probably 3 miles, making me exit with concern for my battery on the car dying.  I would like to say I took that hour to listen to music, talk to a love one on the phone, or contemplate the meaning of life.  Oh no, I spent the time freaking out about being late, obsessively checking the bars on my hybrid battery, and wishing I had something other than John Lennon's Mind Games in the CD player.  I was down to one bar of energy when I finally was out of that concrete hell.

I thought once I was off the highway to try another surface street.  This plan seemed to be working, than I hit my third failure.  I was in the wrong lane and had to make an unfortunate left turn.  My car was wanting me to just go home and temptation was hard to overcome, but I got myself back on the westerly route to work.

Forth fail, I had spent so much time in my car that I had to find a restroom.  I skipped the White Castle because I did not want to smell like a belly bomber all day.  This decision was a bad one, there was nothing on the right side of my car for many, many, many minutes. After an eternity in bladder holding agony, I stopped at a McDonalds and relieved myself.

I finally arrived at my destination 2 and a half hours after I had left my home, 5 times my normal commute.  I was emotionally and physically fried.  Failed on resolution.  Lesson learned, next time call in late and enjoy a cup of tea before braving the elements.
Posted by Tempest ina Pot of Tea at 9:19 PM 2 comments:

In the enjoying the journey category, I have some new Fiestaware, I want to share with you.  I went to Cornucopia with a friend and while he picked out some new serving pieces I picked out a few things for me too. 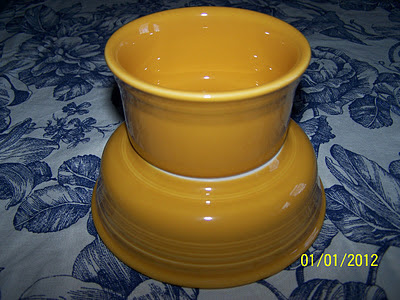 I picked out two pieces in the new marigold, a ramekin and a cereal bowl.  I am not sure if I will buy the place setting in marigold yet, but I have at least a few items in this bright cheery color.  I also was tempted by a clearance sale on the seasonal dishes and bought a platter. 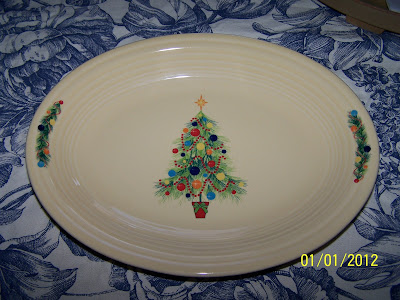 I have guilt about buying a piece of Fiestaware that I will maybe only use for the month of December, but the clearance price was just too tempting to pass up.  Please don't judge me too harshly.

And the final piece in my Fiesta round up was a Christmas present, one of my co-workers bought me.  A lemongrass spoon rest.  It is so unexpected and awesome. 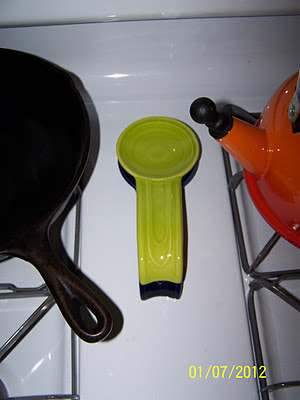 Yes, I see my journey, as a very colorful one surrounded by much dinnerware.
Posted by Tempest ina Pot of Tea at 9:45 PM No comments:

My New Year's Resolution for 2011 was to be lucky.  I re-checked my blog and saw that I tagged 21 of my posts with lucky and to be honest I felt lucky most of the year.  I saw many old friends in 2011, I went to weddings, including my own, and most importantly no one close to me died.  So to 2011 I say lucky me!  I will take that good luck with me the rest of my life and always know one can truly resolve to be lucky.

As for 2012 I had thought of several resolutions: saving the planet, fixing the financial crisis, not mooing at cows when I see them by the side of the road.  However, I wanted something I could actually achieve (not mooing at cows is hard).  In the end I notice that I tend to focus on the end product without enjoying the process of getting there.  I want to slow it down and enjoy my journey instead of rushing to finish line.  There it is, me not wishing my life away to get to the weekend, but me taking pleasure in eating my apple on the way to work, savoring every bite, and living my life more fully. 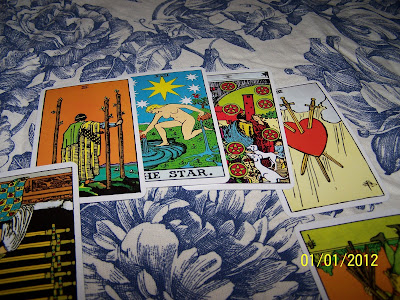 As I do every year, I read my tarot cards and discovered this year will definitely be a year for a journey.  I will be traveling through the terrain of growth and self awareness.  I would say wish me luck with my resolution, but I think I already have that one in the bag.
Posted by Tempest ina Pot of Tea at 11:28 PM 2 comments:

End of the Year Knitting Wrap Up 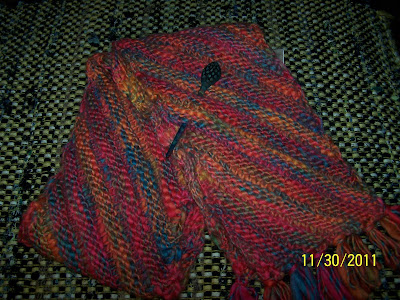 The holidays are over and a new year minutes away so I am posting the last of the my Christmas knitting on the blog.  I have above the Not Quite Straight Scarf, I knitted for Cynthia, she looked awesome in these colors. 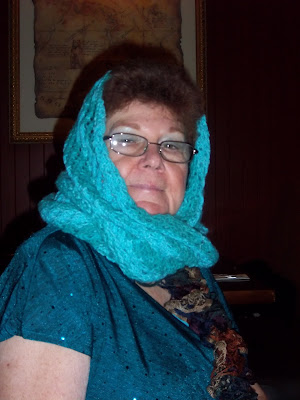 My mom in the Mixt Cowl.  She has been after me to knit her the perfect scarf/cowl.  I keep knitting different designs for her and she keeps telling me what she wants different in the next one.  I am holding back the scarf love and refusing to knit for her for awhile. 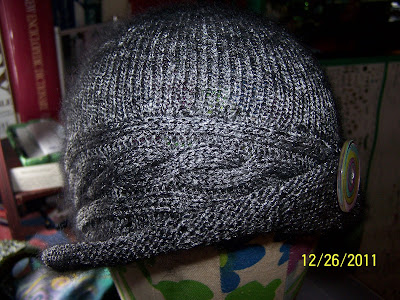 The Provence Cloche was another of those hats (hates), I knitted this year, let's just say enough said on that subject. 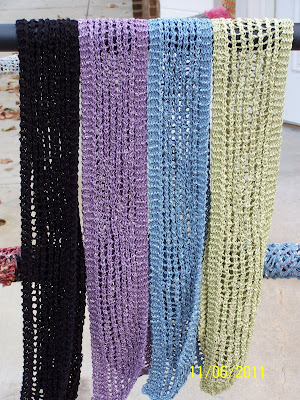 Four very lovely diagonal scarves in a bamboo blend for some of my co-workers.  And I say next year I am going to spend some time knitting for me.  As much as I love gifting knitted items, I want to be knitting more for the adventure than the end product.  And as the fireworks and gunshots ring in my year maybe that should be my goal for the year to enjoy the journey and not worry about the destination.
Posted by Tempest ina Pot of Tea at 12:10 AM No comments: