My beloved wife is off to see her mother in Ohio and I am left to my own devices.  I amE ejoying the quiet around me, no dogs, no other person, just me and my futon.  I love my wife.  I love the dogs, but you know sometimes solitude is good.  Also playing my Partridge Family CD really loud while I sing along, with feeling, is also a special treat only I can appreciate.  You may not want to drive by my house until Natalie gets back this weekend.


Can I just say Shirley Jones is just hot, in this clip.
Posted by Tempest ina Pot of Tea at 10:25 PM No comments:

The last couple of weeks we have added three more states to growing list of places adding equality for their LGBTQ communities.  Rhode Island, Delaware, and Minnesota have added rainbow stripes to their flags, becoming states 10, 11, & 12 to make same-sex marriage legal.

Coming soon the area in the United States in which my marriage license is legal grows.  What I think saddens me is that in one state my spouse and I are equal with other wedded couples, but as we cross state lines we lose those rights.  I don't know about you, but it makes me feel like we are becoming two countries.  Makes me wonder about the United part of the United States of America.

I have been cruising to truck stops collecting state magnets of all the places we are married.  This way Natalie and I will know where we are welcomed.  Here is hoping that soon I have all 50 states welcoming us as equal citizens.

Check out the new mitts I knit for myself.  I am kind of in love with how colorful and graphic these are.  I will tell you the amount of mistakes are legion, but who cares they look great.  I found the pattern, mixed wave mitts (http://www.ravelry.com/patterns/library/mixed-wave-mitts), on ravelry (a fiber enthusiaists website).  For the knitters each color has a series of short rows, which are new to my knitting skill sets.  My less than stellar execution of the technique seemed to not hinder a stunner of a project. 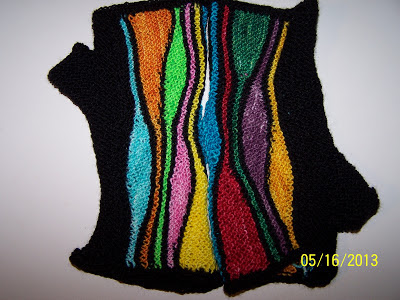 I did three things right on this project.  First I leaned on my friend Rachel from Dyeabolical Yarns (http://www.dyeabolicalyarns.com/) to show me how to do those pesky short rows.  Second I used my stash of Dyeabolical Rainbow Minis for the the waves.  Third, added an I-cord cast-off to the top and bottom to really set off the colors. 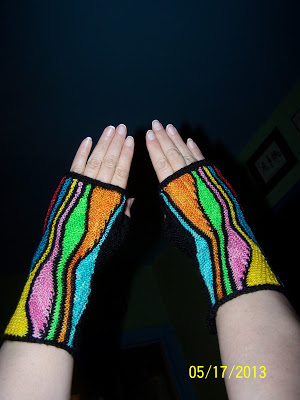 I also really love how I reversed the pattern.  The reversal allows me to wear the mitts two different ways.  I can show my true colors of garish me.  Or I can change to show my deep, primary colors self.  Regardless of which side I decide to show, both are spectacular.  Call me humble and subdued, NOT! 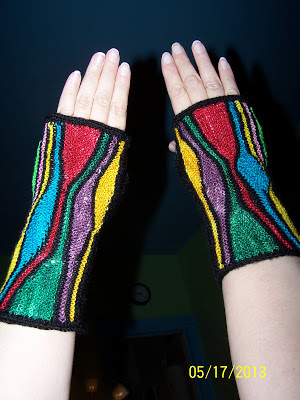 Posted by Tempest ina Pot of Tea at 10:58 PM No comments:

The Women Before Me


Recently, my mom loaned me a photograph of four generations of women who came before me.  I look at the firm lines of their mouths and I can see the grit in their craw.  People only crossed these women at their own expense.  Truly.

Mrs. Bonnekamp came to Leasburg MO with money in her pocket and a general store which she ran in this whistle stop of a town.  Her daughter, Elizabeth, married a tall Scotsman named Fred Fife and the two of them ran the local tavern.  Elizabeth and Fred Fife had five childern, but only one was a girl, my grandmother.  Dorothy Margaret Fife was spoiled by her father, brothers, and grandmother.  However, Margaret and her mother would often fight, which always ended with Margaret hiding under the bed and Elizabeth poking her with a broom to get her out.

Margaret's own daughter, Margaret Ann, is my mother.  I knew only my grandmother and mother, but I like to think I must have something in me from my ancestors.  Maybe I got a love of shopping from Mrs. Bonnekamp whose first name I don't know.  And I am sure I got my friendliness from Elizabeth.  I have been told she loved the constant stream of people into her tavern and that she never met a stranger.

Today as I say happy mother's day to all the mom's in the world, I also say thank you.  Thank you to the women from which I am descended.  Thank you for giving me the genes which have come down in my DNA to help make me who I am.  And thank you for teaching me to not frown so sternly in photographs.  Those faces are so rigid, I have to wonder if their gridles were killing them.
Posted by Tempest ina Pot of Tea at 9:43 PM 1 comment:

Things to do when you up early on a Saturday and don't want to balance your checkbook:  BUY FIESTAWARE! 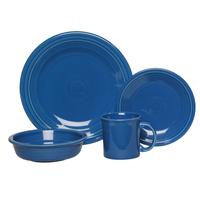 Well, really it is the good people at Homer Laughlin allowing me to pre-order Fiestaware in the new Lapis color. Can't wait for it to arrive next month so it can join the Tempesttea home for colorful dishes.  Makes me want to spend the month stalking the mail carrier.  Obsession may not always be pretty, but in my case at least it is colorful.

Posted by Tempest ina Pot of Tea at 9:32 AM No comments:

Today I Became "The Man"

Maybe you know who the man is, or maybe you don't.  Wikipedia defines the phrases as, "The Man" is a slang phrase that may refer to the government or to some other authority in a position of power.  And it is meant not in a good way.  Really, I have no power at work, but today I felt like I was tricking everyone.  My new staff member started and was looking to me for guidance.  At one point I wanted to run screaming from the room, but I kept myself focused and tired to be the supervisor I wanted to work for. 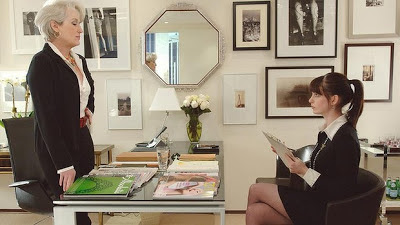 However, there is another situation with a contractor, not on my team, which is testing me.  This woman treats me like the devil oppressor because I keep moving her stuff.  Granted it is not her stuff and really she is working in our designated area and...Yup, I have become the man.  I don't know if I will be able to accept this new side of myself.  Of course I could just throw myself in the pokey or the workhouse then I could complain about being oppressed by the man.
Posted by Tempest ina Pot of Tea at 11:11 PM No comments:

I have been working hard lately and my brain has just been tired.  So I have not been blogging at the frenetic pass I had earlier this year.  I was working so hard that last week I spent a day at the other facility ran by my new employers.  Now this jail is the older building, dating from around the 1960s and it looks much like you would expect an institution built from that time period would.  It has a name, but everyone calls it the workhouse. 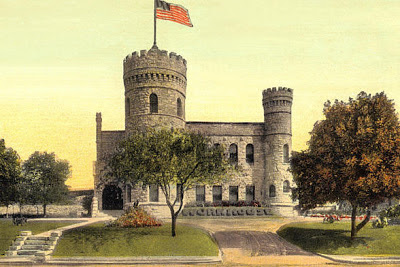 I have to say the English major inside me feels positively Dickensian every time I say, workhouse.  I told my wife where I was headed.  She very dryly said, "Dear have a good day at the workhouse."  Yup, I am turning into a character from a Victorian novel.  Just call me, Philomena Philes.
Posted by Tempest ina Pot of Tea at 11:55 PM No comments: