For the past week I have had the song "Magic," by Pilot stuck in my head.  Over and over, never believe it is not so.  I heard it in a restaurant and it has taken possession of every waking minute of my life.  Usually, I cleanse my mental radio with humming the "Wreck of the Edmund Fitzgerald."  "Magic," seems to be impervious to this cure. 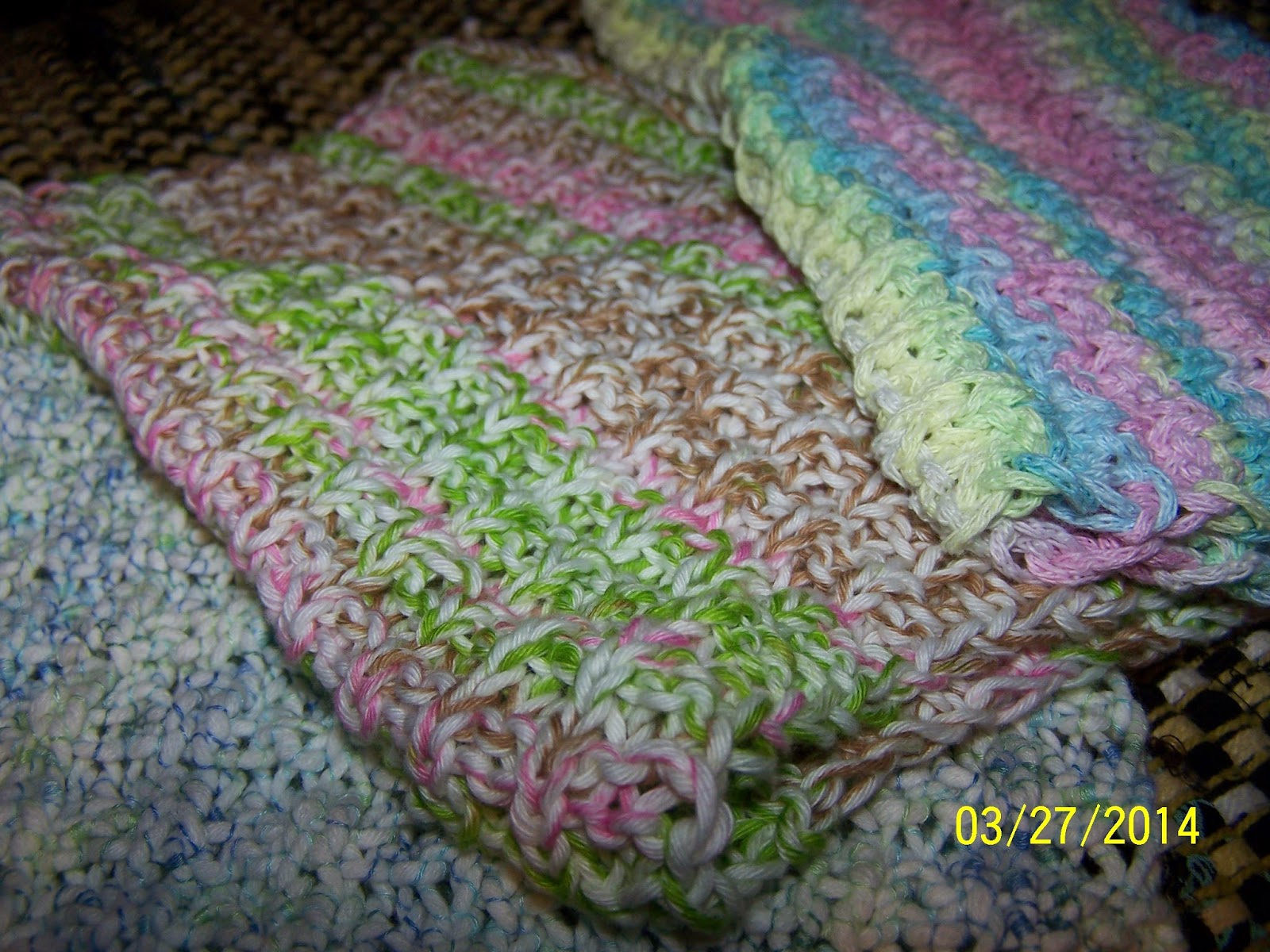 To the soundtrack of this song I have been knitting waffle stitch washcloths.  On ho ho that stitch is magic.  Much like the song stuck in my head, I got stuck on that stitch and made 3 washcloths.  I love how squishy the knitted fabric turns out.  I started to think of all the stash yarn I could use up by making washcloths.  It got a little ugly for a few minutes as I started realizing how many single balls of cottonish yarn I have available for washcloths.  The morning light of reason hit me and I decided to give the waffle knit stitch a break.  I was able to stop myself and move on to another project. Now if only I could get the music in my head, crazy music, to stop, it would be...MAGIC!
Posted by Tempest ina Pot of Tea at 10:41 PM No comments:

The First Step is Admitting You Have a Problem 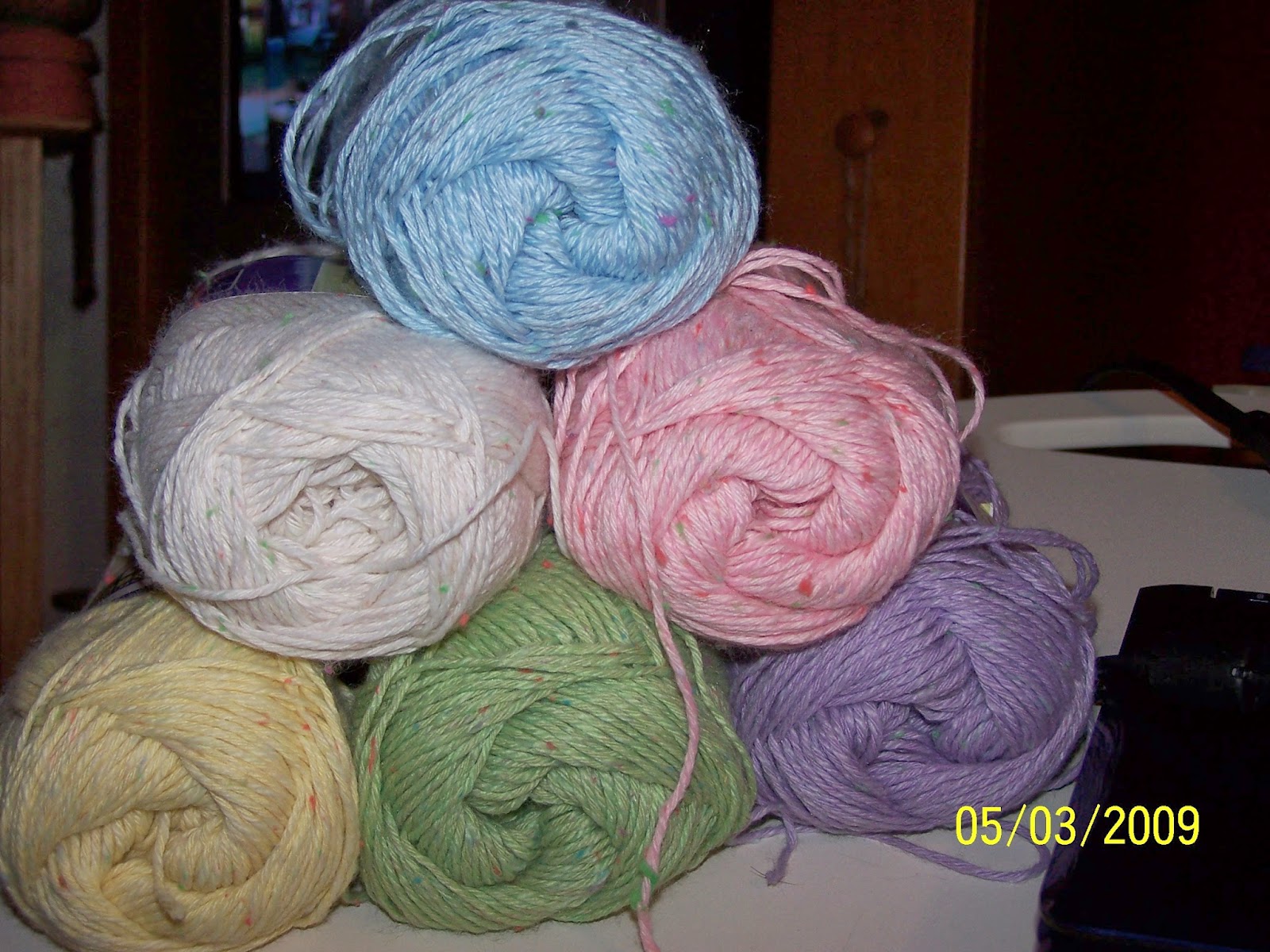 Okay, I am admitting I have problem.  Because I knit I have lots of yarn.  I am sure there are others with stash issues larger than mine, but whatever I am talking about my problem, not theirs.  Sometimes I buy yarn with projects in mind, but sometimes not.  In 2009 I made a hairpin lace wrap for my mother with 6 skeins of a cotton / acrylic blend yarn I bought in a rainbow of pastels for the project.  The DK weight yarn was 250 yards per skein.  I thought it would be just enough for a nice wrap.  The pastel colors when laid out side by side they reminded me of the marsh mellows in one of my favorite morning cereals, so I called it the "Lucky Charms Hairpin Lace Wrap."  I liked the end product and my mother seemed to like it too.  However, it left me with about a half a skein of each color or I thought about 750 yards of yarn. 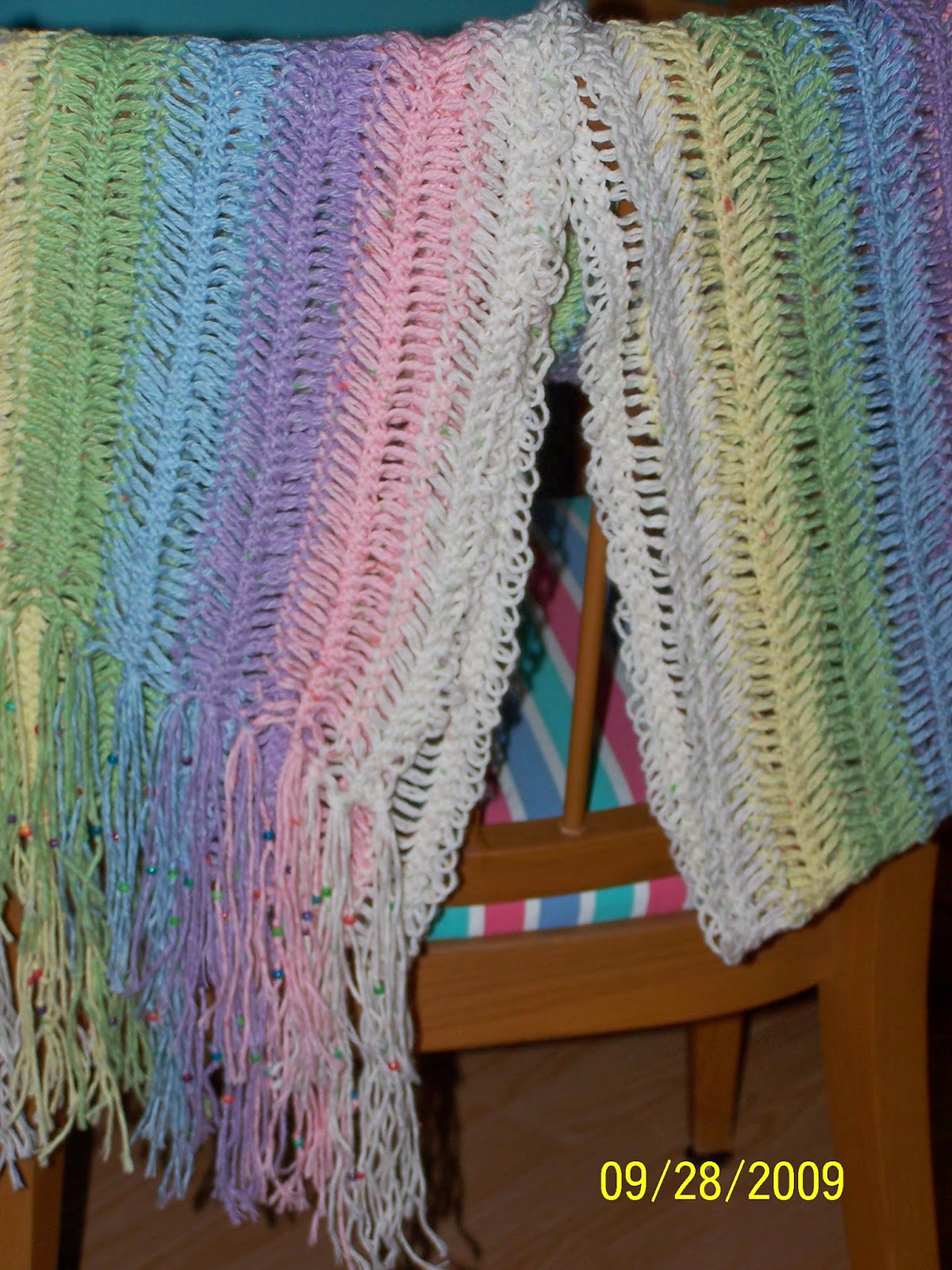 I put all the yarn in a bag and shoved it in my pie safe trying not to let it bother me that I had these half skeins just hanging out in my stash.  Most of the time I could forget they waiting in there unknitted, but occasionally it would nag at me. I would say to myself I should get that yarn out of my stash. 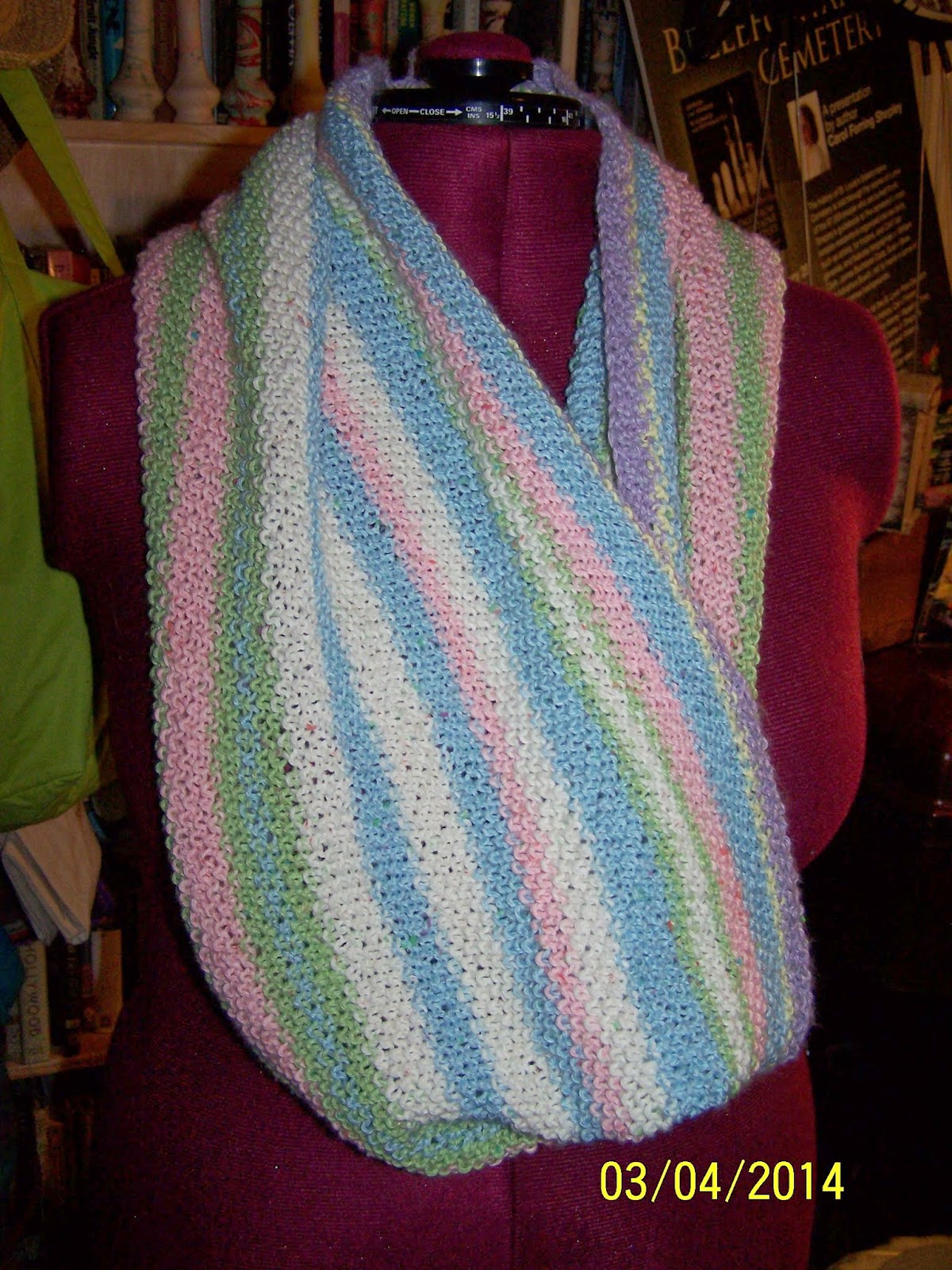 One day while looking at a knitting pattern book I saw just the thing for the waiting yarn, a cowl.  The design was called the "Ice Cream Cozy Cowl."  As you can guess the pattern used pastel colored yarn.  I thought that is the perfect pattern for eating up all this leftover yarn.  Now I had two things nagging me, using up the yarn and making the cowl.  Until one day I gathered the yarn, the pattern, needles and cast on.  I was convinced this cowl would relieve me of these leftovers.  Magical thinker me. 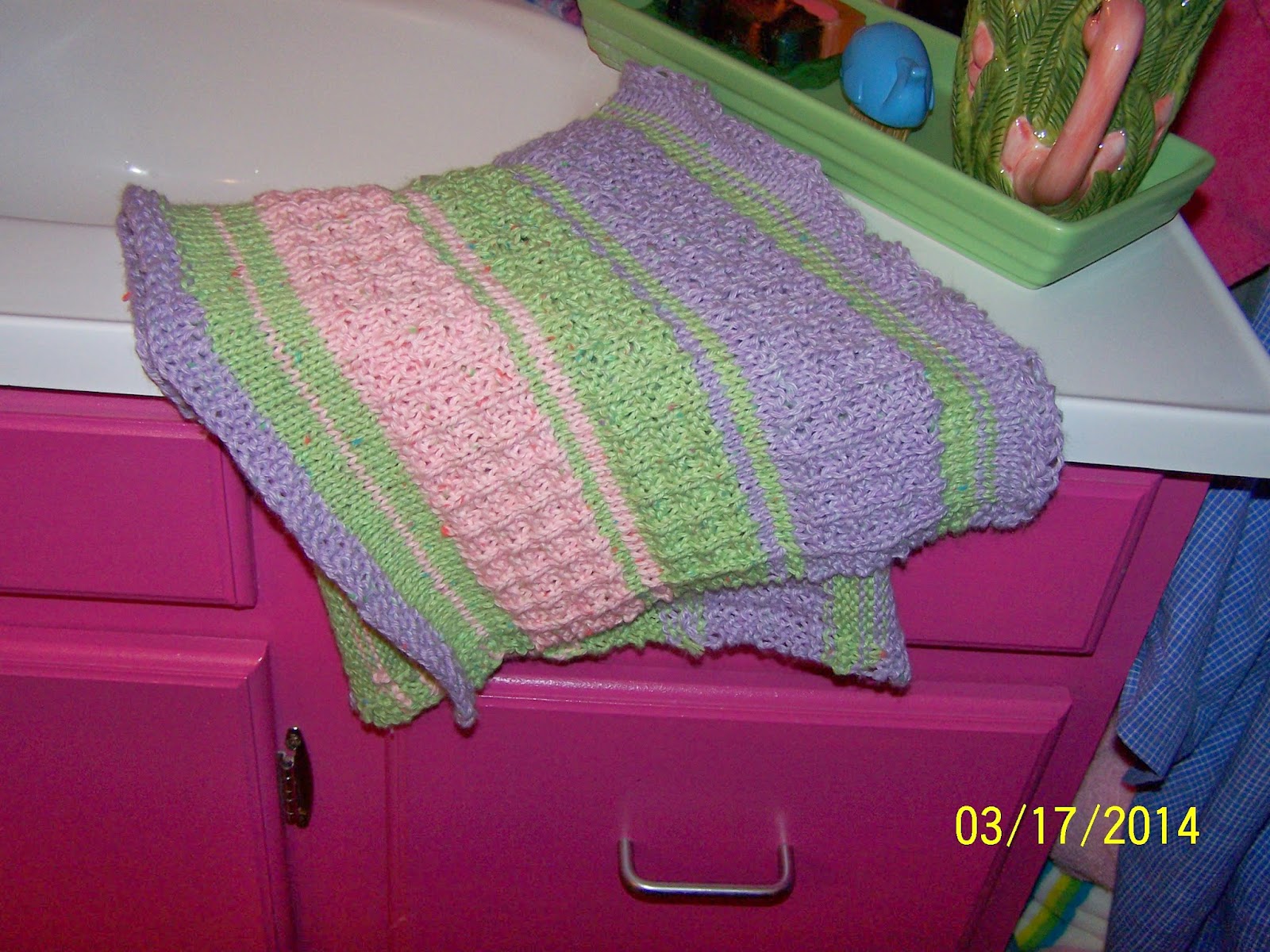 Well, that didn't happen my friend, once I was done, I still had yarn.  Lots of yarn, over 300 yards of yarn.  I guess I had more than I thought in those skeins.  Instead of just getting rid of the leftovers from the leftover yarn like a sane person might do I decided to knit a towel.  Well then I needed to knit another towel.  Still I had yarn, so in desperation I knitted a doily out of the scraps.  When done with the doily I still had about 18 inches of yarn left.  I gave myself a pass on those last inches of yarn, but I am not going to lie I kind of wished I could have used it in the doily too. 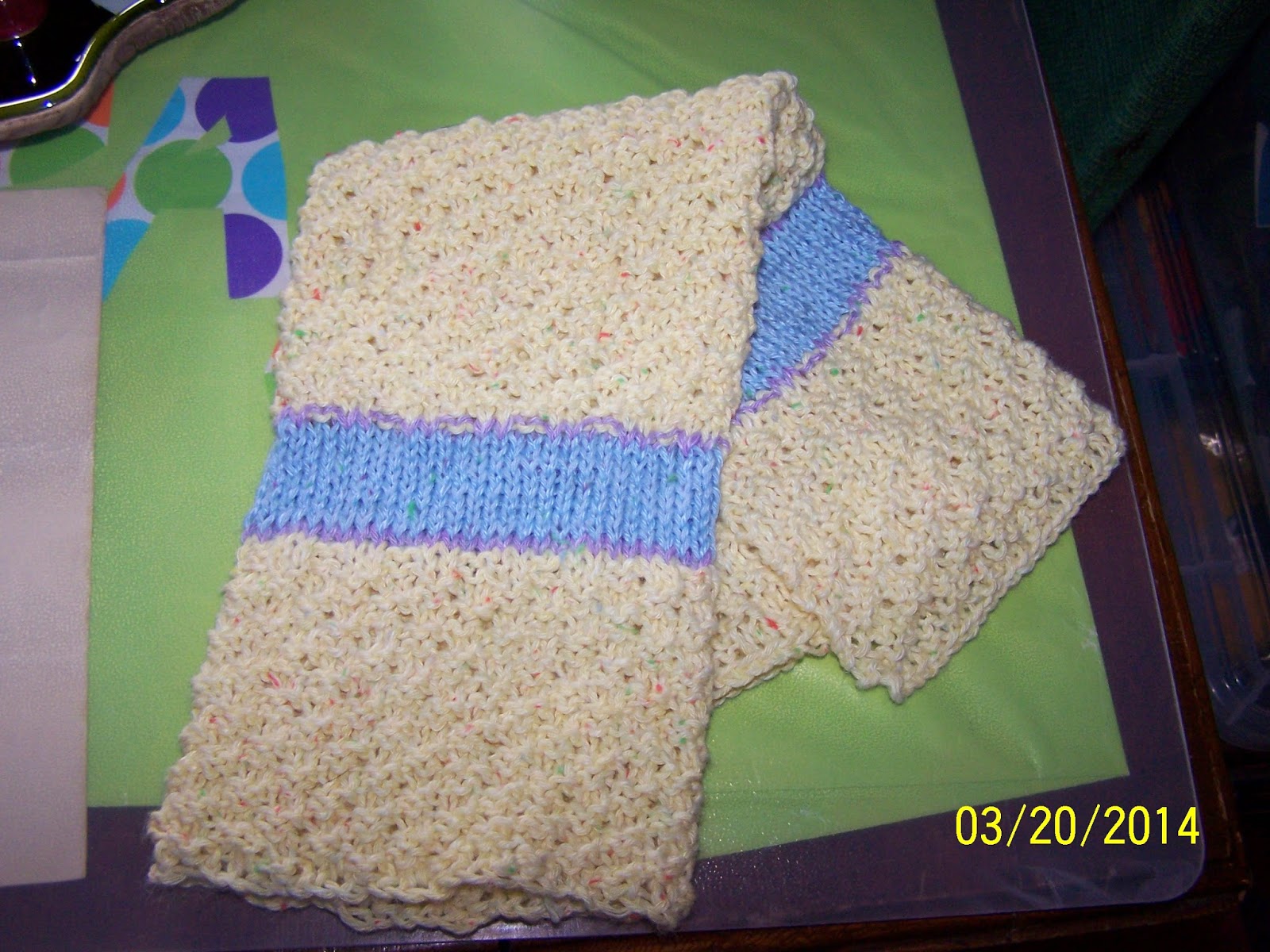 In total I knit a hairpin wrap, a cowl, 2 towels, and a doily.  I wish I could have just said no to my obsession with using up all of my yarn, but I just couldn't.  MUST knit to the last inch of yarn...At least I am admitting I have a problem. 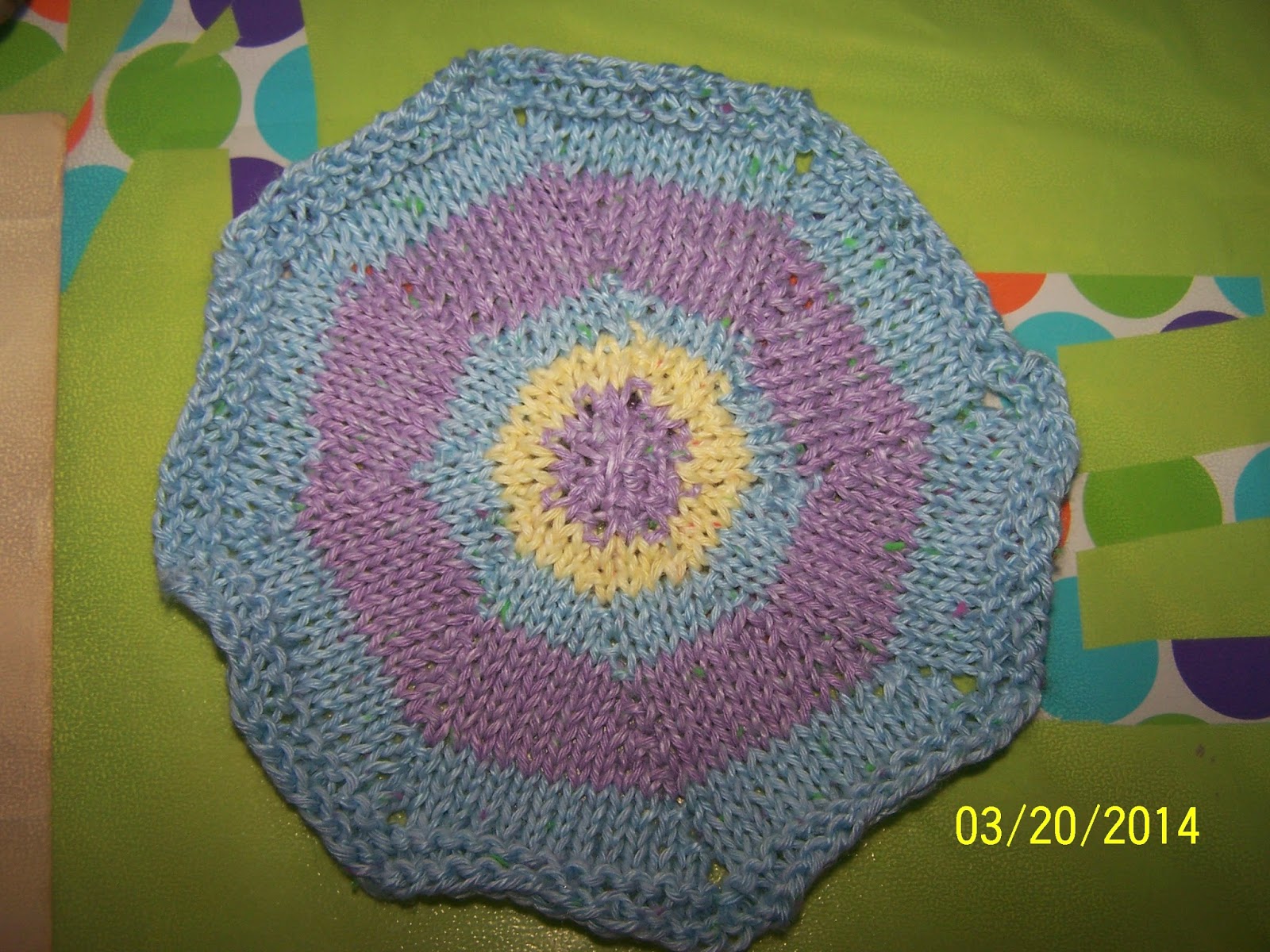 Posted by Tempest ina Pot of Tea at 8:35 PM No comments:

Fiestaware Goes Back to Their Roots

I woke up this morning with no idea the good people at Homer Laughlin were going to rock my world today.  First the good news, they introduced a new color today, Poppy.  It is a very sassy red that looks very similar to the vintage fiestaware red from the 1930s.  You know the red that had the distinction of being just a little radioactive.  The color got pulled because of that added ingredient (good decision).  I guess the company decided it was high time to bring back the color sans radioactivity.  A very vibrant color it is, I am sure a nice selection will come to live with the rest of my collection.

After getting over the excitement of a new color I read a little further on the announcement and was shocked to hear they will be discontinuing my favorite color, flamingo.  I know you think I wailed and gnashed my teeth, but I did not.  I decided I just need to make sure to stock up on the flamingo fiestaware pieces, I want.  This, of course, means I will need to take a trip to Cornucopia, the local purveyor of brightly colored dishes,  and do some shopping.  That thought made me happy, very happy.

Posted by Tempest ina Pot of Tea at 11:13 PM No comments:

Please don't be confused, I love baubles, not bobbles.  As in knitted bobbles.  I think they look weird, like a bulging mistake on my beautiful knitted fabric.  Okay, now that I have got that out of my system, it is with some sadness that the building block for March is all about bobbles.  I gritted my teeth familiarized myself with how to knit one of these abobblination.  I studied my building block for the month and thought well it is only 16 bobbles.  I cast on and got through the block glad it is the only one of the 12 blocks I really don't like.  Natalie was right with me on this opinion of this knitting abobbration.  As we compared our 2 blocks she said to me, "Why would you want to knit something that is just going to catch on things?"  Good point, but we stuck to the Building Block #3 pattern and suffered through the design.  We are looking forward to the rest of the blocks in the book, but this one was a bitter bobble to swallow.

I am so lucky to live in a city with such a vibrant knitting community.  One of the local knitterati, Brooke Nico, is also a national knitterati know for her crazy awesome lace designs.  Our hometown knitter extradinary went out and published a book of her own.  We picked up the book Thursday night at Kirkwood Knittery, Brooke's home shop.  After months of seeing sections of the book I was excited to see the finished product along with all the knitted samples.  Seeing photos in a book and the real  McCoy are often two different things and as "Lovely" as the project are in print format they are even more exquisite in person.  Case in point the Triangle Tulip Shawl.  Gorgeous in the book, divine when laid out where you can actually see the genius of the perfectly stitched lace.  If Brooke's mother hadn't been politely asking me if I wanted punch, I might have just grabbed the shawl and ran out of the shop.  I left the store that night with the book and a desire to improve my lace knitting skills. 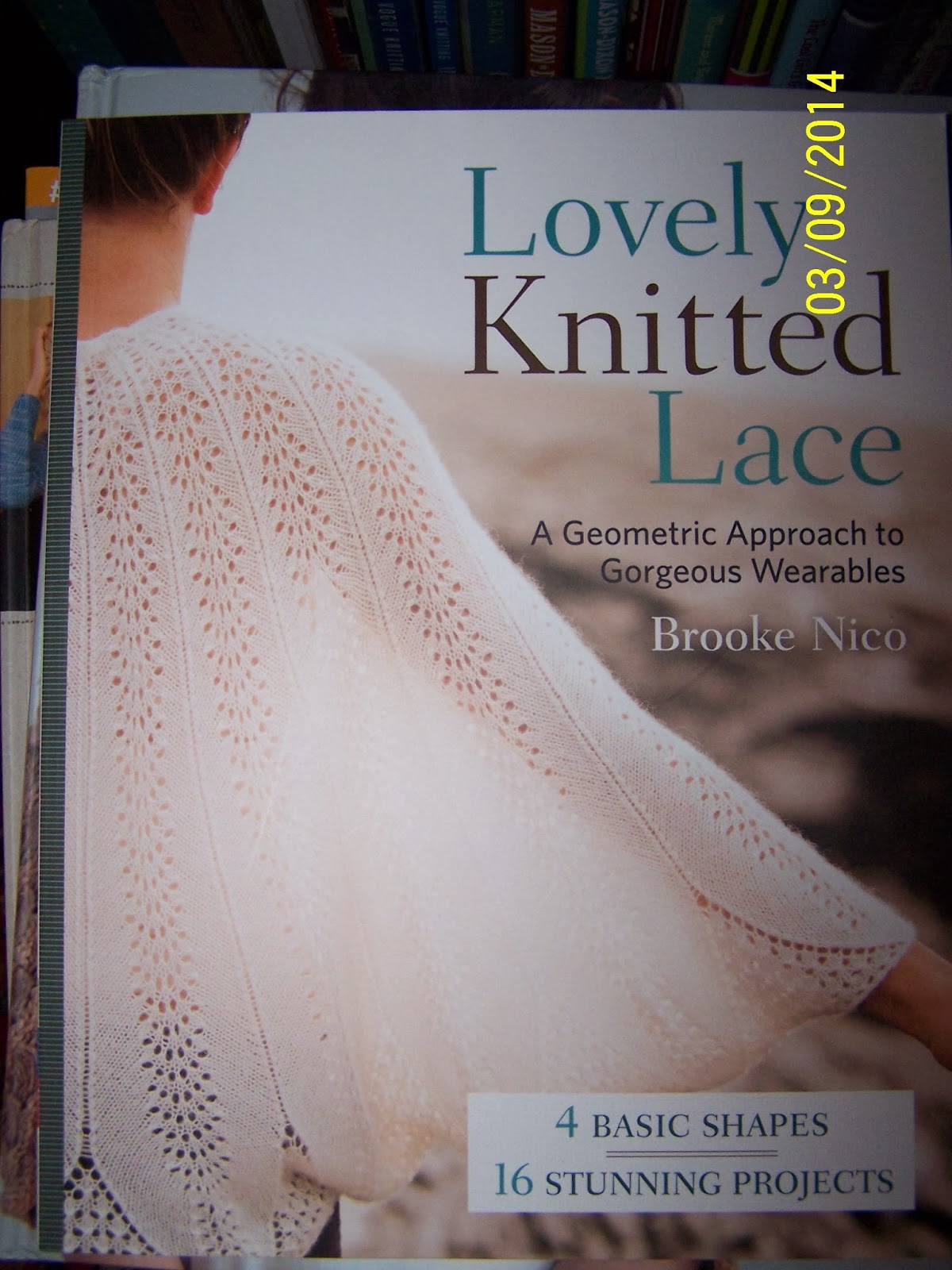 Congratulation Brooke on some truly beautiful designs, wishing you and your book much success.﻿
Posted by Tempest ina Pot of Tea at 9:02 PM 2 comments: 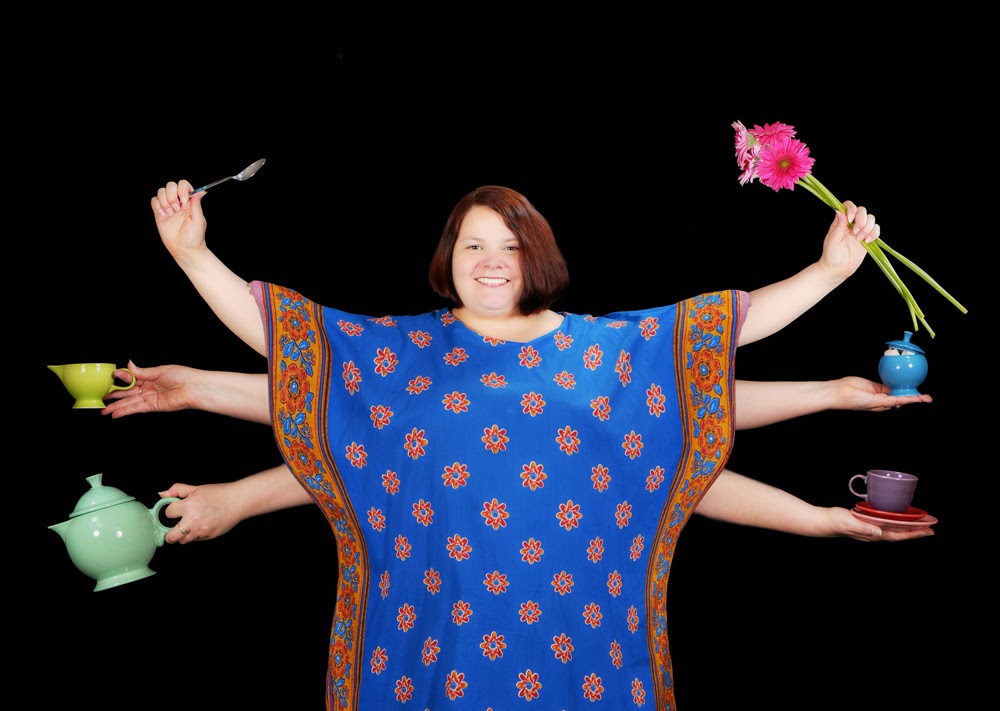 Great day to be out and about celebrating my birthiversary (birthday + anniversary).  In celebration of the birthday part, found this photo a good friend took of me looking like a goddess of Fiestaware.  Silly photo, but definitely looks like my day.

My day was about tea at the new London Tea Room location.  Natalie and I had the afternoon tea for our anniversary, which was lovely.  New location a thumbs up (all six of them if you are looking at the above photo).  My beautiful wife even gave me a new piece of bling to add to my collection.  I have been wanting a black diamond circle pendant for awhile, and she decided since the garage I really want isn't coming anytime soon the pendant would have to do.  We took a double selfie to commemorate the day and you can see how dreadful we are at selfies. Natalie looks like she is snorting the phone. However, notice new bling around my neck. 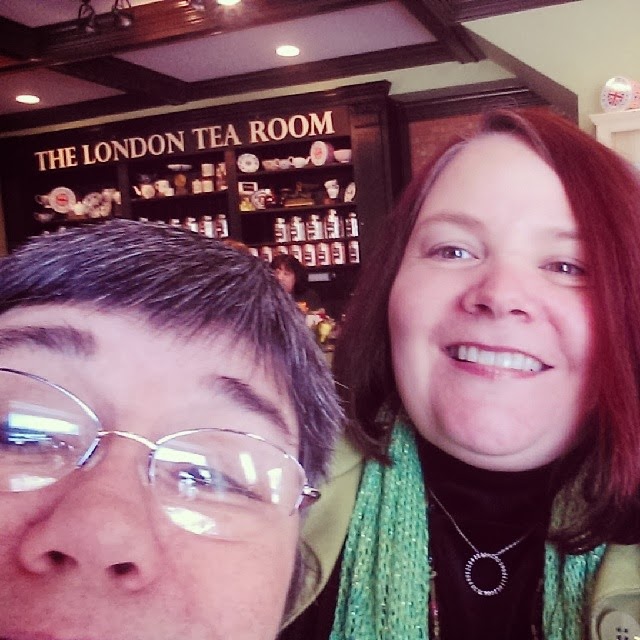 Last year on our anniversary we were married in fewer states and were unrecognized as spouses by both our employers.  This year we are up to 17 states and both our jobs say yes this is a family.  Even the federal government says this is a photo of a legally married couple.

We have come a long way since we were married 3 years ago.  Next year it will be even better with more states and more wins in the same-sex equality column.  And who knows maybe next year I will get a garage for my birthiversary.
Posted by Tempest ina Pot of Tea at 4:44 PM 2 comments: 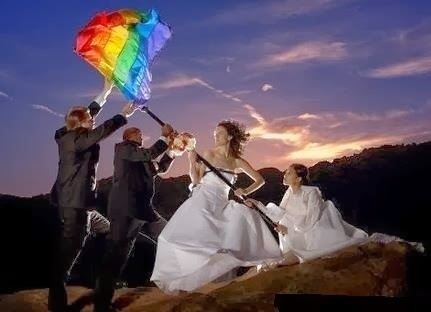 I love this image! It shows what I most truly want for my birthday EQUALITY.  Please join me in supporting the lifting of this ban on the freedom to love who you chose and have that love recognized by our government.  Thank you.
Posted by Tempest ina Pot of Tea at 12:55 PM No comments:

Tis the Season for FIESTAWARE!

The thing I love about my birthday is I get MORE fiestaware.  Because of course you can never have too much fiestaware.  My Minion, who knows me so well, started out the birthday season with Indian food and two new pieces to add to my grand collection.  He gave me a flamingo and a lemon grass heart dish.  So cool.  I love filling these dishes up with brightly colored veggies that pop with color on the table.  And since it was my birthday I bought myself some fiestaware dish towels.  Aww tis the season for birthday indulgence.  A big thanks to my Minion for always making me feel special. 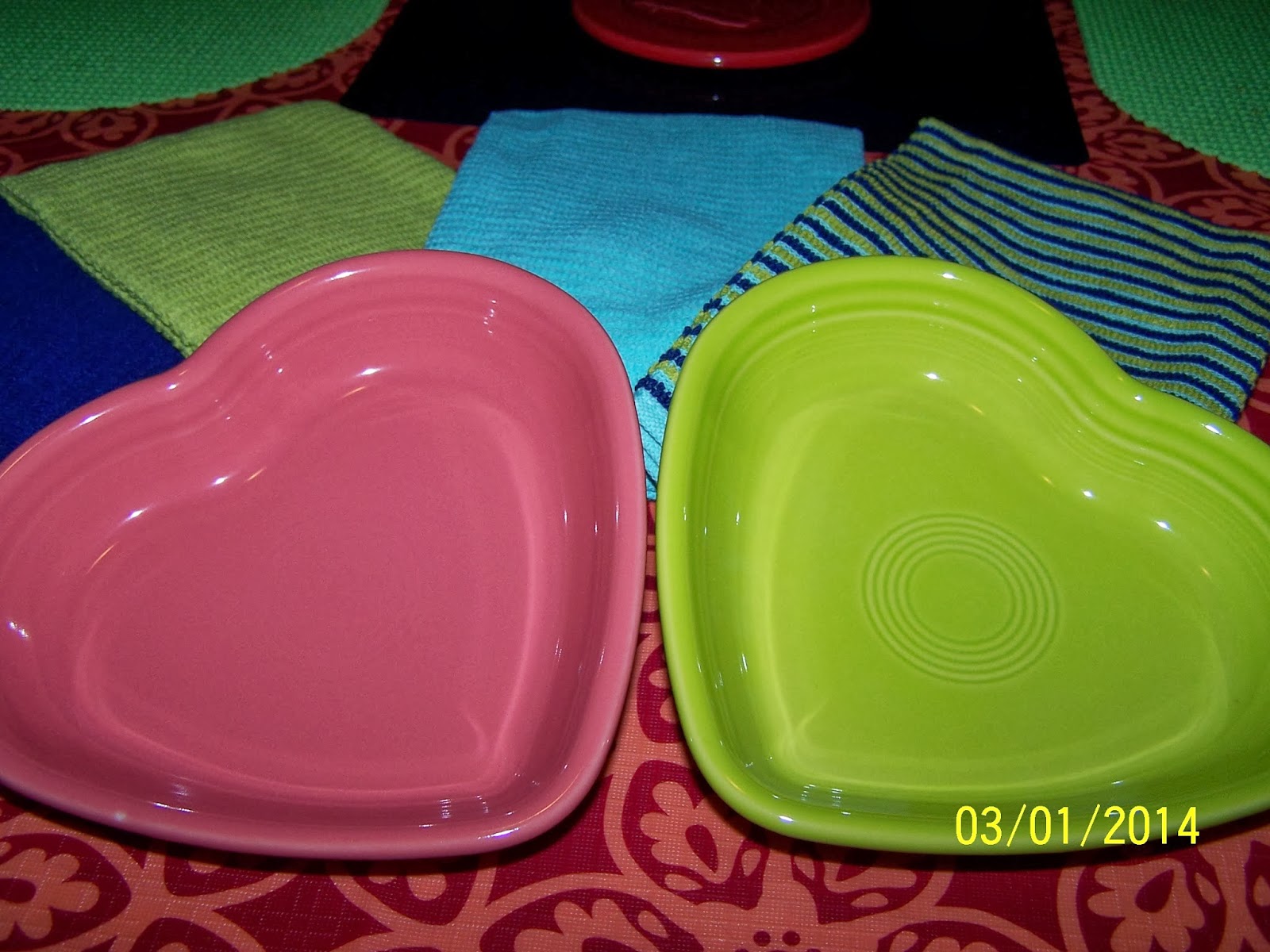