Downtown Adventures, Or How I Found the London Tea Room 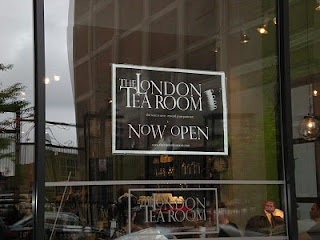 I decided today my beloved wife and I needed an adventure. I love tea and I love London so I thought a place called the London Tea Room ( http://www.thelondontearoom.com/ ) might be the sort of place for me. I said, "Let's have an adventure today." My wife went along with her usual stoic countenance. I gave her direction and after the hunt for a parking spot we were off to the tea room. 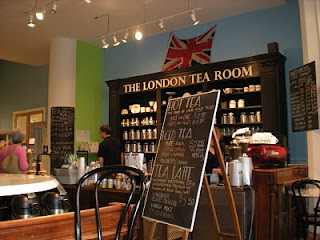 From my first glance I was excited, the large open room full of everything tea took my breath away. I ordered quiche and scones from the menu marked "Eat Me" and lavender earl grey from a menu marked "Drink Me." My wife had organic vanilla, which I picked for her, and a grilled cheese sandwich. The tea, the clotted cream, the scones, everything was lunchalicious! 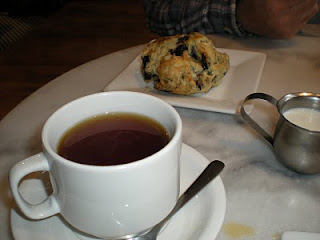 We sat at a table close to the windows watching the downtown dwellers walk their dogs, smoke cigarettes, and go about their urban lives. We castigated ourselves for not bringing our knitting so we could linger over our tea and each other in such a fun place. We decided the next time we would be more prepared for a return adventure. 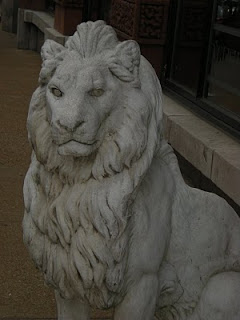 We even made some new friends. Next door to the London Tea Room were two lions standing sentinel over the 1500 block of Washington. Looking fierce and stoic they reminded me of my beloved wife. My stoic wife said with a grin, "Good adventure." And the whole London experience was completed with a rain storm as we walked to the car. 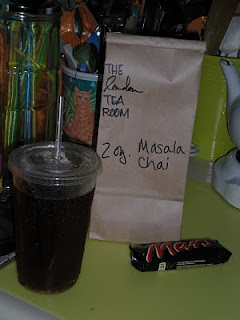 I even brought a little of downtown home with me: chai tea, a Mars bars, and one for the road ice tea. All adventures should be this yummy.
Posted by Tempest ina Pot of Tea at 2:50 PM 2 comments:

A Tale of Two Scarves 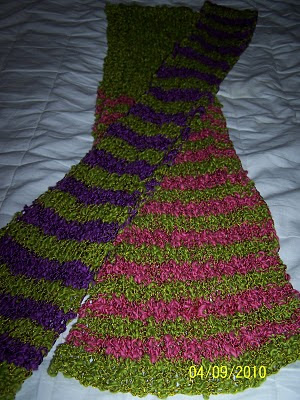 It was the best of knitting, the worst of knitting. Our heroine, me, bought some Cascade Pearls from the clearance bin at the old curiosity shop with the greatest of expectations that I would knit something fabulous with the yarn. After an initial project I thought wow this stuff knits up like the dickens it will make an awesome scarf.

Sighing, over these hard times, I moved on to another project quicker than you could say Martin Chuzzlewit. I started knitting scarf two, the pink and green one. I decided to not be a Scrooge with the yarn and cast on 30 stitches. I knew the pink wouldn't make it all the way around so I decided to do ten stripes on each end. I liked this scarf so much better, it lays a little flatter and looks much better to protect our heroine from the chill of a bleak house.
Posted by Tempest ina Pot of Tea at 11:55 PM No comments: 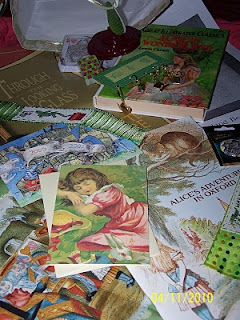 Like my inspiration, Alice, I got to celebrate my unbirthday this year. I must admit this was the perfect year for an unbirthday. My friends Rachel and Deborah asked me early in the year to join an Alice in Wonderland swap. Though the swap sounded fun, I had to pass, my life was just not conducive to the whimsical mood of the swap. But not to despair the wonderful ladies decided I deserved an Alice in Wonderland present anyway. And oh my little White Rabbits was it fun. 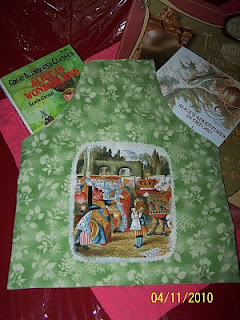 I got Alice in Wonderland books, buttons, cards, postcards, stitch markers, posters, quilt pattern, bookmarks, bag, yarn, and mitts (whew). I was overwhelmed by the bounty in my bag. I just kept expecting the Mad Hatter to jump out and proclaim "Clean cup move down." 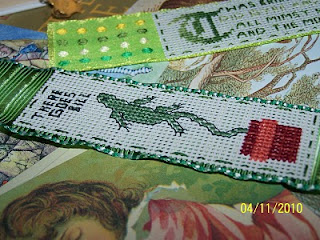 Deborah made me the bag (with awesome inside pockets) depicting beautiful scenes from the original book. She also made me lovely bookmarks that are delightful to behold. Much love, Deborah, much love. 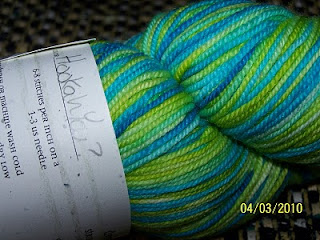 Rachel, yarn dyer extraordinary gave me some of her luscious creations, Hookah You and Flamingos on the Croquet Lawn sock yarn. Gorgeous! And as if not enough Rachel knitted me a pair of Pretty Lace Hand Warmers ( www.purlbee.com/pretty-lace-handwarmers/ ). Every item out of the bag got an ooohhh and an aaahhh, and filled my heart with love. OK I am verklempt all over again. 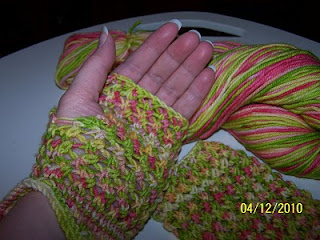 Thank you ladies, this was the best unbirthday presents ever! 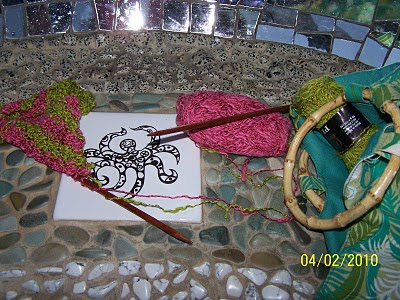 So early this morning about 4 AM I rolled over and heard something make a large crack sound. I went from barely conscious to wide awake in a second. Things shouldn't make loud cracks in my bed (or anyone's bed for that matter). I sat up and felt around in the dark for the source of the sound. After much effort and illumination I discovered my rosewood #10 Lantern Moon straight needle in my bed with a splintery crack in it. I had been knitting in bed before lights out and must have forgot to put it in my bag. After much gnashing of my teeth and rending my clothes I went back to bed to dream of broken needles. I am 3/4ths of the way through a project and this my only pair of size 10s. Whatever shall I do? I tried to file the crack down, but all I did was leave a rough divet in my needle. $6.50 later I have a pair of Clover Bamboo Takumi needles to finish my project. Call me shallow, but I just don't look as cool knitting with plain old Takumis.
Posted by Tempest ina Pot of Tea at 10:12 PM No comments: 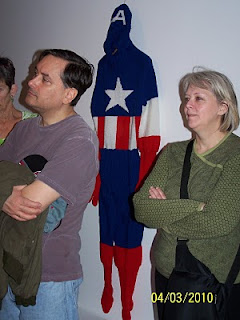 First I don't know some of these people in the photos, they are random people at a very full artist talk at Laumeier Sculpture Park. So sorry folks if you did not sign a model release, I forgot the form at home. Now back to the our not so regularly scheduled blogpost. In what seems like a life time ago I went to an installation of the Mark Newport knitted superhero costumes at Laumeier ( www.laumeiersculpturepark.org/newport ). It was an interesting exhibit and the organizers promised a second event in April which would include not only an artist's talk in the gallery, but a knit-in. 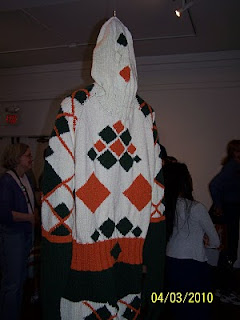 Newport talked about his inspiration for the costumes and how he came up with his patterns. I learned much about his artistic process and found Newport to be a delightful speaker. He obviously enjoys what he does and his energy on the subject of knitting is infectious. 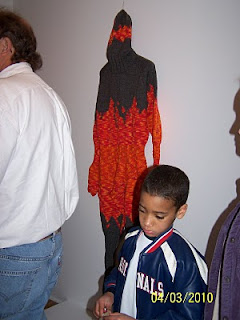 I am including photos of his Captain America, Argyle Man, and the Flamer Costumes. Each had a cute story or observation from the artist like, why would anyone put yellow, orange, and red colors together for a garment. Or the Argyle Man was inspired by living in a very preppy New England during the mid-eighties. 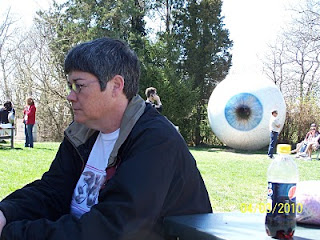 After the talk we sat in the park, knitted, spun, talked about knitting, and meet a whole bunch of knitters. My beloved wife joined the party and she did not even seemed creeped out by the large eye watching her. 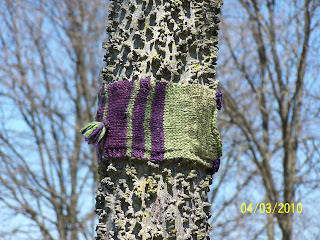 And I even saw a few yarn bombs at the park. A very beautiful spring day was enjoyed by all.

Posted by Tempest ina Pot of Tea at 1:13 AM No comments: