With our fabulous Florida Destination as Gainesville, we were excited to find out that this Gator infested city was the home to two Local Yarn Shops (LYS). And as is often the case, the day we went in search of places to abuse our credit cards, one of the shops was closed. Fortunately, we went back a second day to include the closed shop. I thought it was universal that all yarn shops were closed on Monday, not Tuesday. Obviously, like so many things 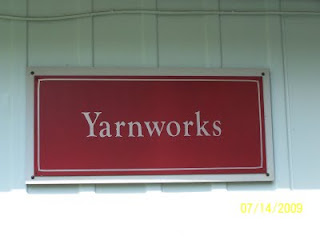 , I was way wrong on that one too.

The first shop we visited was Yarnworks ( http://www.yarnworks.com/ ). The lot was packed when we pulled up so we were a little concerned that some crazy sale was going on, but no it was the delivery service next door that was hogging up the lot. The sign promised to have needlepoint supplies and imported yarn, and I am here to say yes it did have some imported yarn. In a very small space, they had a significant amount of yarn. I was especially impressed with the variety of cotton yarns I saw there. The Egyptian cotton from the Great Adirondack Yarn Company and Blue Heron were just too tempting. The colorways were very similar, but I didn't care I had to have them. 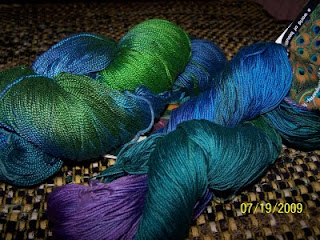 I liked this shop, please don't get me wrong, and I spent some money there, but it did have a few problems. I found the staff there, a little older and reserved. They were not rude, just not nearly as excited by my visit. The shop was also very crowded with yarn and it was a little difficult to get around without running into things. We went back a second time and bought more yarn, but the ladies there never really warmed up to us. 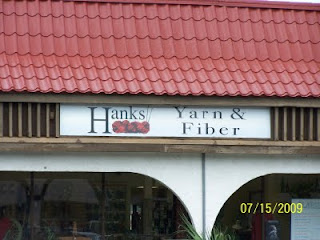 The second time we went to Hanks, Yarn and Fiber ( http://www.hanksyarn.com/ ) they were open. Almost immediately I saw a difference between the two shops, sitting on couches with their kids in car seats and knitting on their laps, were women with tattoos and cool haircuts. The proprietors were very welcoming and glad to see us. I noticed a little kids area with a little girl working on giving herself some temporary tattoos on her arm.
The sock yarn selection was very nice, with Lorna Laces dominating the selection. Some beautiful colorways called my name, but I decided on the one called "Rainbow" and even picked out a cute little (okay not on my feet) sock pattern to make with the yarn. I even bought a hank of hand dyed yarn that sported the shop label. Hanks had supplies for dying yarn and spinning yarn. I was impressed by the selection of spinning wheels, but not enough to want to spin myself. 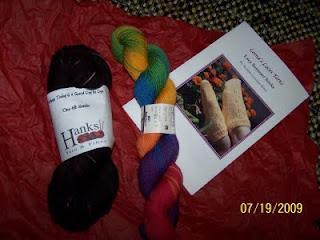 As much as I liked the feel of this shop, it did have a flaw. The yarn side was a little weak. The selection just could not compare to that of the other Gainesville shop. I just kept thinking these two shops were like meant for this location. What one lacked the other excelled at and vice/versa. Finally, as a strange bit of trivia both yarn shops were across the street tattoo parlors.

Posted by Tempest ina Pot of Tea at 6:52 PM No comments: 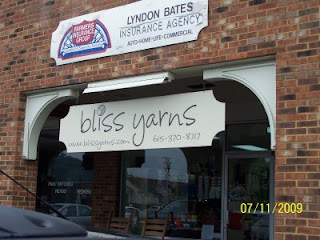 In the middle of July, I was off for vacation to Florida to see baby Kaelab. Taking advantage of the drive through a very lush southland by visiting the yarn stores. I sent little snipets of my trip as I went, but I want to gush some more about the crawl.
I visited 5 stores in four different states. Nashville Tennessee was the first one on the trip. With the Knitter's, Crocheters', Weavers', & Spinners' Travel Guide and my cellphone in hand I made my way to the first location.
Last October, beloved Cuz and I made a jaunt to Nashville and I blogged about the city then http://tempestinapot.blogspot.com/2008/10/nashville-part-deux.html ). I stand by my comments. Nashville is a city I would love to get to know better. There is a good vibe in the city, the knitters are very friendly, and the yarns shops very nice. Bliss Yarns (http://www.threadedblissyarns.com/ ) in Suburban Nashville was right off the highway and full of knitters clacking happily along. The shop was nicely organized and full of beautiful and tempting accessories, like project bags and needle cases. I found the book selection especially good. I was impressed by the friendly staff and the big comfy couches (notice the plural). The shop appeared to be a hub of knitter social activity with a large table for adults to sit at and a small table full of toys for future knitters. 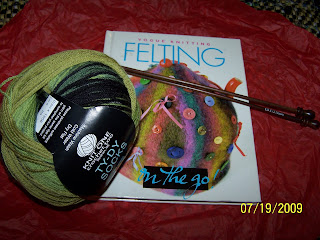 The only negative thing I will say about the shop is I found the yarn selection not as varied as some of the other shops I visited. She had a nice selection of Cascade and sock yarns. I fell in love with this particularly yummy green and black colorway TY-DY sock yarn. I look forward to dropping by the shop the next time I am in the neighborhood. 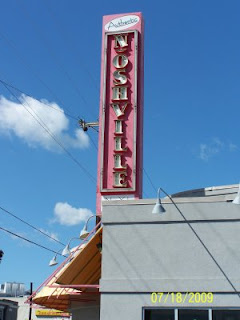 I also took advantage of being in the same city with one of my favorite deli's, Noshville in Nashville ( http://www.noshville.com/ ) . I love the name, but the food is especially delicious. They even have a dill pickle bar! I also found out that Noshville actually has 3 locations throughout the area. Sadly, the deli has no dinner hours, breakfast and lunch only.
I even saw a guy in a kilt filming a commerical on my way out of town. I love Nashville.
Posted by Tempest ina Pot of Tea at 10:54 PM No comments:

Found lys in Paducah! With. Ewe in Mind is very messy, but owner lots of fun. Yarn crawl over on the way home.
Posted by Tempest ina Pot of Tea at 2:41 PM No comments:

Noshuille in nashville yummiliovs!
Posted by Tempest ina Pot of Tea at 10:07 AM No comments: 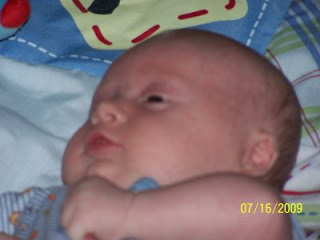 So I spent the last week in Florida visiting my adopted baby sis, Dora, and her new little guy, Kaelab. Kaelab was as most month old babies are, really into sleeping, eating, and filling up his diapers. He is especially fond of formula, as in he is addicted to the stuff. And the boy can hang with the best of the knitters, he went to string stores and charmed knitters through out the Gainesville area. The trip was definitely worth its weight in yarn. 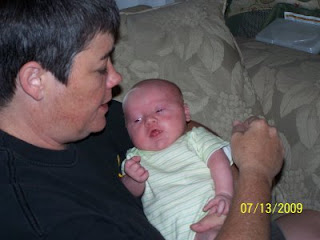 Kaelab got to meet his Ankle Drew. The two of them hit it off like needles and string. They talked about knit theory and whether it was okay to buy acrylic. In the end they mostly agreed on everything with Ankle Drew only having a few fussy moments.
Kaelab was so excited by our visit he started to consider rolling over as an option for his daily routine. His parents, Dora and Gene, and his Grandparents, Poppa T and Nona, were very impressed. We were just impressed that the boy had possum toes that latched onto anything he could find. It was hard to say goodbye and know the next time we see him, he will be bigger and much more adept at charming everyone into doing his bidding.
Funny, I remember when his momma was a little girl, all arms and legs with a big smile. And now she is all grown up and raising her own family. Time flies and my knitting is always behind. Still got one more bib to knit for the boy.

Just got out of harry potter. Hate that i have to wait 2 more years for the next one. Alan is awesome!
Posted by Tempest ina Pot of Tea at 8:22 PM No comments:

Hanks of yarn in gainesville is full of nice fun ladies selection ok. Lots of tattoos!
Posted by Tempest ina Pot of Tea at 1:51 PM No comments:

Hanks of yarn in gainesville is full of nice fun ladies selection ok. Lots of tattoos!
Posted by Tempest ina Pot of Tea at 1:51 PM No comments:

Yarnworks of gainesville has nice selection of yarn, but shop was messy & cluttered. Catered to older client. Tomorrow hanks of yarn & harry potter.
Posted by Tempest ina Pot of Tea at 12:41 PM No comments:

Baby & dora are beautiful, but blue laws are a bore. Tomorrow more baby.
Posted by Tempest ina Pot of Tea at 10:45 PM No comments:

There are elephants in nashville!
Posted by Tempest ina Pot of Tea at 4:47 PM No comments:

On our way out of town crossing old miss as i text can't get excited about il
Posted by Tempest ina Pot of Tea at 10:10 AM No comments:

Flamingo Fever or Why My Bathroom is Pink

Once upon a time (or when I was in college) in a land far, far away (or Phelps County, MO where I went to college) while I had way to many California Coolers an obsession began. In my inebriated state instead of pink elephants appearing to me, I was visited by pink flamingos. Sometime the next day when my hangover began to dissipate, the vision of flamingos stayed and suddenly they started multiplying all over my apartment. 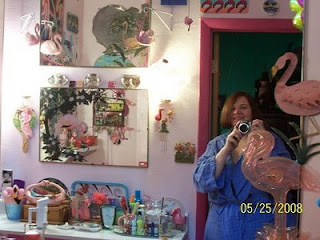 Through the years my flock got bigger and bigger until I was surrounded by the fabulous birds everywhere I went. I have mirrors, dishes, bowls, rugs, pictures, bottles, cups, and even a toilet brush holder with flamingos on it. Friends buy me flamingos for my birthday and Christmas and my wonderful mother even made me a flamingo quilt. I have so many that at some point I designated my bathroom as the flamingo nature preserve. Men often have issues using my bathroom it is so pink. 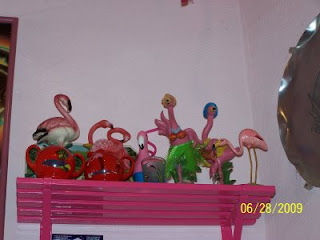 Last birthday (not the most stellar birthday) I received two more editions to the flock and I had no place to put them. With luck and a hot pink shelf I got a whole new roosting area for my flock. The two on the far right are my newest pair, Herb and Andrean given to me by Transplant Mom. I love that they are so garish and perfect for me.
Posted by Tempest ina Pot of Tea at 11:13 PM No comments: