I can get lost in youtube for hours watching videos.  Today I was in a Disney mood.  This clip is one of my favorites from Alice in Wonderland.  I love the smoke letter blowing caterpillar.  I was surprised by how similar to texting some of those smoke missives were. I also adore his little, pointy-toed, slippers and the elaborate hookah pipe; the items are just too decadent.  I am sure there are parents who might be offended by him blowing smoke letters in her face, but I love how the "C" becomes a bracelet on Alice's wrist.  When I first saw this movie I loved the multi-colored smoke and felt very smart that I recognized he was singing out vowels.  I can remember wanting to sit through the movie twice just to see this scene again.  Today a few clicks on youtube or with a DVD player and I can watch the wonderful philosophical exchange between a caterpillar and a little girl ad nauseum.  On a day that is so cold and snowy, I am very lucky to be able to do just that.
Posted by Tempest ina Pot of Tea at 3:12 PM No comments: 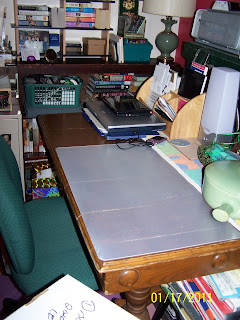 This time last year my life was very full of those things none of us like to confront.  Watching my dad's life slipping away, I just could not be bothered to worry about the growing stack of papers with 2010 printed on them accumulating on my desk.  Somewhere in late April I noticed the mess, but by then I just did not even care that the stack was growing larger and starting to take over.  By October I was starting to care about the size of the stack, but I thought I would just put it off until the end of the year.  The end of the year came and I was looking at an organizational mess.  I dreaded even looking in the general direction of my desk.
This weekend was one of those amazing longed for 4 day weekends.  I set my mind to it and with much determination set about getting this paper monster tamed.  On some level, it was filing bank statements and receipts, boring, but not emotional.  On another level it was almost as painful as reliving the last year.  Sandwiched in between phone bills and pay stubs were condolence cards and photos of my dad.  Little emotional hand grenades making me tear up and  sometimes cry. I stayed resolute and soldiered on. 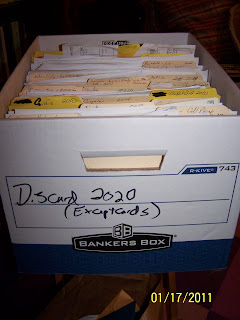 I also found stacks of birthday cards and notes from my friends. Colorful little missives that I could hardly bring myself to open let alone read when they arrived.  I threw them into the stack of papers and forgot them.  This weekend with time and distance the thoughts of love and good wishes actually could seep through and warm my soul.  They made me feel really lucky (my word for 2011) to have such wonderful friends.
Project: see the surface of my desk and be able to start organizing my life again is a success.  I have a clean surface, Files are boxed up, given a disposal date, and neatly stacked in the basement.  It is a small start, but a start.  I can control the space around my desk and from here I will be able to start putting the other pieces of my life together.  Things are improving, my desk is all the proof I need.
Posted by Tempest ina Pot of Tea at 10:50 PM No comments:

I love potatoes baked, boiled, fried, mashed, nuked, and even occasionally raw, I like them all.  I have always dreamed of being able to make perfect potato pancakes, however I have had no success.  The pancakes have come out in pieces, burned and stuck to the bottom of the pan.  Once it was like an horrid liquid that cooked up like really bland scrambled eggs.  In the past I have tried shredded boiled potatoes mixed with eggs and milk and then mash potatoes with eggs and milk both methods produced less than stellar results.  This morning I tired something different.  I coated mash potato balls in flour and then fried them in my cast iron skillet with a little olive oil.  At the very end I put a sliver of cheddar cheese on the top.  Eureka, luck was on my side!  Success at last, I paired my pretty little pancakes with strawberries and I shared them with my lovely spouse. Lucky in the kitchen me.
Posted by Tempest ina Pot of Tea at 10:31 PM No comments:

Black Swan, Or Having a Good Day

Today I was off from work.  I had some things I needed to do, but mostly I wanted to be on my schedule, not someone elses.  I have come to treasure time I spend not at my job.  I was lucky I had an extra day off left over from the New Year's day holiday.  I have a glorious 4 days off (okay now it is really 3).  One of my goals for today was have bacon and eggs and see a movie. Little luxuries maybe, but today I felt downright decadent having a leisurely breakfast and then buying a movie ticket at noon.

The film, Black Swan has intrigued me.  A film about ballet, with Natalie Portman, and rumored to have lesbian content, count me in.  I have wanted to see it for weeks, but my schedule has not had much room for a movie.  Unfortunately, everyone has been blabbing about the movie, people I work with, facebook friends, and literally people on the street screaming out the ending.  Grrr. I went anyway, because I wanted to see it myself and not wait for the dvd.

Put a check in that box, film watched.  I am not going to make the mistake of giving away any of the secrets, but I think Portman gave an Oscar worthy performance.  Her Nina made me weep with sadness, on some level I identified with elements of the character.  Because secretly I am a prima ballerina in my spare time.  Stop laughing it could happen, in my next life maybe.  Regardless of the differences between the graceful, waffish Nina and the solid, klutzy me, the film made me walk away thinking I should learn to be kinder to myself and accept my flaws. I love it when I walk away from a movie with new insights into my own character.  Black Swan definitely gave me that opportunity for self-examination, and made me nervous I think I am sprouting black feathers on my shoulder blades too.
Posted by Tempest ina Pot of Tea at 10:06 PM 1 comment:

Pulitzer Prize, Or Knitting in Style

Some days I am very lucky, Saturday was one of those very lucky days.  I had the good fortune to spend my day doing what I wanted to do, which was going to a knit in at the Pulitzer Museum.  Saturday was cold, but the sun came out and made me want to spend sometime walking around the Grand Center taking photos before the knit in.  There was an old roofless church still standing despite its lack of amenities. No windows, no floor, no roof, but still standing waiting for parishioners to come along and make it whole again. Around the corner from the church I was surprised to find Sitting Bull staring back at me. 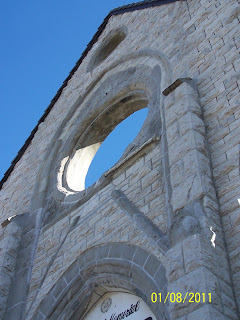 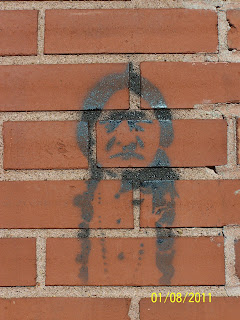 The cold eventually drove me into the Grand Center, City Diner. I took a seat at the counter and enjoyed a good meal and very cool restaurant. I have been a long time patron of the City Diner so to experience my usual Ruben in a totally different location was a treat. Sitting at the counter had the added bonus of being in the thick of all the activity. 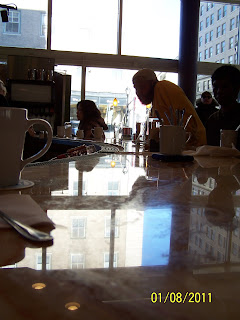 After a brisk walk through the theatre crowd going to the matinee of "Spamalot" I headed to the Pulitzer. I have never been to this museum before and I thought going to a knit in there was the perfect introduction to the place.﻿ I was one of the first to arrive and the staff kept asking me if I was a "Knitter," like I was some sort of exotic creature. Of course I brashly said, "Yes, you can tell because I have two bags." After wandering past a very long bank of shelves with hundreds of paper mache hands on its multiple cubbies, I picked a location and began knitting. 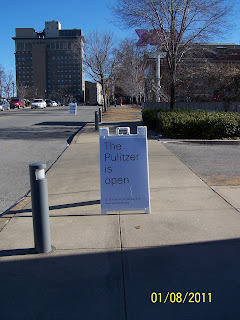 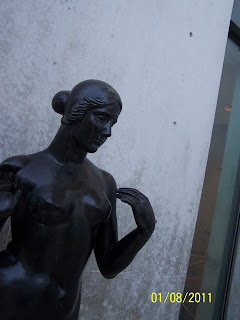 I was soon joined by an interesting knitter and spinner named Pam.  She was very smart and was making a hat for her husband out of her own handspun yarn.  Later we were joined by her friend, Sarah who was very vivacious and then some of my own knit night buddies, Eva and Mike.  I was there about two and half hours, knitting, talking, meeting people, checking out other peoples' projects, and just enjoying the hell out the event.  I love knit ins.  Everyone is eager to show off their projects and talk yarn.  I just wish we had more events like this one.
I felt so invigorate (and it wasn't just the cold) by my day.  I felt lucky.  Lucky to have the day off from work, lucky to know how to knit, and lucky to always meet such amazing knitters.  In other words rresolution still going strong.
Posted by Tempest ina Pot of Tea at 12:27 AM No comments: 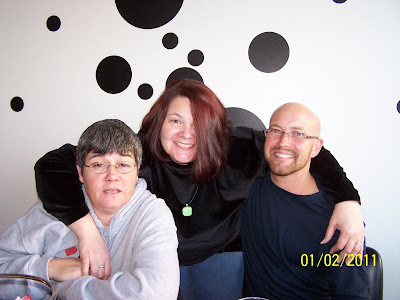 So my resolution to be luckier in 2011 is off to a great start.  I got to spend the beginning  of the year with one of my favorite godsons (OK my only godson), Jase, up from Florida.  Jase is such an amazing godson, he is a world traveler full of love and energy.  His passion for life is infectious and I always feel so alive when he is around.  I have watched him grow from an energetic young adult to a compassion man out to make a difference in his life and the lives of those he touches.  I always get excited when I get the opportunity to spend time with him. 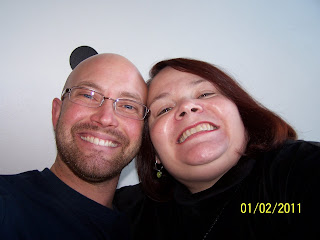 This trip we ate at some of our favorite restaurants.  We shopped, bar-hopped, saw the city, and just enjoyed the comfort of spending time with someone you truly love.  I talked about how difficult 2010 was and about the loss of my father.  I was surprised by how patiently he listened, and how I kept my tears to a minimum.  He talked about his job and his new passion for marathon running.  We shared pieces of ourselves without fear of judgement or disdain.  I needed that and I hope he did too. 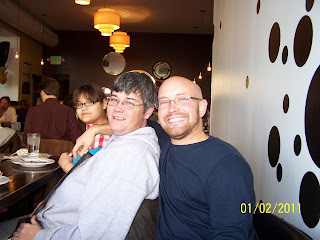 Today we left our beautiful boy, now a man, at the airport this evening.  I felt a little twinge, not knowing when we will see each other again.  However, I feel lucky for having been given the gift of these last few days with Jase and Natalie.  Resolutely, I remain lucky.
Posted by Tempest ina Pot of Tea at 7:52 PM No comments: