Did I mention that I am still trying to catch up with my virtual life and right now my virtual life is still stuck on Christmas? I spent so much time on Christmas knitting it is worth being almost a month late. As long as I have been knitting I have had grand ideas on presenting my loved ones with beautifully knitted items. Sometimes my success is spotty, but I hope each item is at least marginally better than a spray painted macaroni necklace. 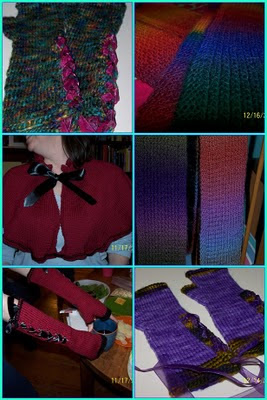 My count was four mini mochi scarves, three pairs of fingerless, lace-up gloves, and one adorable caplet. I was very happy with the fingerless gloves pattern I got out of Alterknits by Leigh Radford. Not only were the finished objects pretty, but the pattern was so much fun I made a pair just for me. Every recipient cooed over the gloves. The caplet was another fun project, and the choice of Mission Falls Yarn was perfect for the pattern. The yarn is so yummy it almost knits itself.
But those Mini Mochi scarves are horses of very different colors. Crystal Palace, a company I usually like, sent me a pattern for scarves with its new Mini Mochi yarn. The pattern was nice and I thought good Christmas knitting projects. I was not expecting so much betrayal from the yarn. I bought 4 cakes of yarn, two in rainbow and two other colors for my friends Barb, Kim, Tammie, and Fiona. Three of the four balls had knots in the ball. One of the balls had a knot about 5/7 of the way in. The fiber had been space dyed (long color dye areas which fade to the next color) and the knit completely ruined the colorway. I struggled and struggled to make the change less noticeable, but the scarf just did not turn out as I had envisioned it. Another ball had uneven color repeats. Again a little randomness I don't mind, but these repeats ranged from 2 to 3 inch bars of color to a sudden 6 inch color bar. Maddening, I tell you maddening.
All of the giftees seemed to love the presents (or at least they gave good performances). I am questioning whether or not I want to do this again next Christmas. The pressure is just so intense. Remind me of this next September when I start looking wistfully at patterns and yammering on about Christmas knitting.
Posted by Tempest ina Pot of Tea at 11:00 PM No comments:

Yes, It is Still Christmas in My Mind 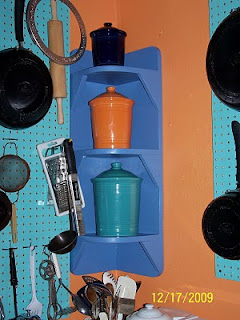 I got so many wonderful presents this year, but these are two that surprised me the most. My thoughtful wife made my kitchen wish come true. For a few years I have longed for a corner shelf to relieve some of my space issues next to the stove. I envisioned a beautiful rounded shelf to fit my Fiesta canister set. I had hinted and pleaded and even bought an IKEA one for the space. 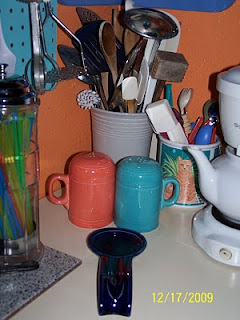 This year I came home to find it perfectly positioned and ready for my beautiful canisters. My wife had our very handy neighbor make one for me. The shelf is so awesome and now I have all this space next to my stove and can display even more of my lovely Fiestaware. I am feeling the Fiestaware love.
I was also surprised by receiving some lavender and chartreuse handspun yarn. The yarn is so perfect for me. I am so excited about knitting something with this yarn that I can't wait to use the yarn. I just don't know what to do with the yarn. I have about 85 yards and the pretension to knit something wonderful. Any suggestions are appreciated. 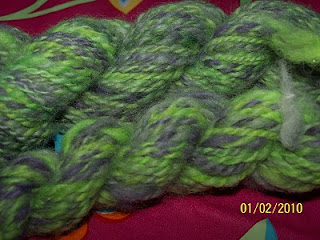 I got so much love this year from all of my friends, thank you it was much appreciated and much need. I promise not to continue to be such a stranger to my own blog, but as things progress with my dad I unsure at how well I will be able to keep that promise. And again thank you for all the support. Much love TT

Posted by Tempest ina Pot of Tea at 9:34 PM No comments:

Heard "in the air" by genesis reached 4 cellie cause that is the knitter ringtone. No call but kept hearing phil crooning. Took a few seconds 2 connect that it was a radio. Sigh wake call received.
Posted by Tempest ina Pot of Tea at 10:20 AM No comments: