Fiestaware, Algebra, and My Relationship

I talk about my beautiful wife all the time.  However, most relationships take work, ours needs lots of hard work.  Both of us are complex people and sometimes those complexities are difficult hurdles to overcome.  I find she is worth the time and attention; I can only hope it is the same for her.

In the ebb and flow of our lives, we have not always succeeded in making things work.  When people ask how long we have been together I always just say we have known each other since we were 16.  If they inquire deeper, I make some comment that the number is an algebraic equation.  However, this time around we have been together 17 years.  The first time around we were together 8 1/2 years, but things fell apart.  After the break-up both of us spent almost 3 years trying to get over one another.  When the getting over didn't happen we started working towards a reconciliation.

Now reconciliations take work too.  Lots of work, forgiveness, compromise, and in our case fried chicken.  Lots of fried chicken.  Natalie promised me if we got back together, she would make me fried chicken with all the trimmings (mash potatoes, gravy, and asparagus) whenever I wanted.  There were many reasons to come back, but that fried chicken was just too hard to resist.

This year for Valentine's Day my wife cooked for me a very fine dinner of all my favorites including her fried chicken.  She knew I was a little down thinking about my dad, but she worked hard to make it special.  She even plied me with gifts of Fiestaware.  She knew all my favorite things, fried chicken, Fiestaware, and her.  Sometimes relationships take no work at all.

Posted by Tempest ina Pot of Tea at 2:57 AM No comments:

Portrait Scarf or Adventures in Felting

Some time ago I came across Shibori Knits: The Art of Exquisite Felted Knits by Gina Wilde in a clearance bin.  After I bought the book, I glanced at the designs, and shelved it away.  Other than some unfortunate acne looking scarves, the book really did not have anything I thought I would knit.  In the past I saw a scarf with a felted wool center and silk sides and wanted to make one.  Surprisingly, I had missed this pattern in Wilde's book. 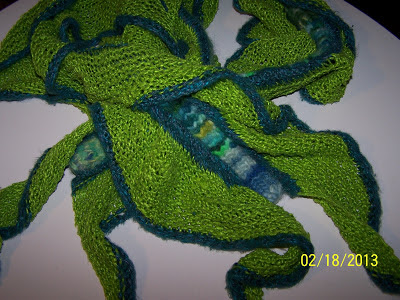 I knew I had some silk and soy yarn that wanted to be this scarf.  I dug through my odds and ends and came up with 4 different wool yarns to use for the center.  I knew the cobbled together center might be a problem, but not to be deterred I jumped into this project with both hands and a size 10.5 circular.

The author suggested that felting can be an adventure, and what an adventure it was.  First came the 70 inch I-cord and picking up about a million stitches on each side (okay it was more like 175 and the pattern said 300).  Again I forged onward.

Once the knitting was done, I got a little stuck.  As I have stated before we have had a hot water problem in the basement, so I had to wait for the washer to get fixed.  Well, my lovely wife made sure I had my hot water.  Once the washer was fixed with a pair of jeans and a Shout color catcher sheet, I threw in my pretty green scarf.

I stood next to the washer waiting for the big reveal and what a reveal it was.  I expected a felted center, but not a felted edge too.  Well, the 100% soy, Pure yarn felted too.  At first it was disappointing, but with a little trim I actually liked the way the edges fuzzed up too.  I love how the scarf has the look of a drapey much loved scarf.  Glad I took another gander at Wilde's book.  Loving this pattern and the end product.
Posted by Tempest ina Pot of Tea at 12:55 AM No comments:

Three Years and Counting or Missing My Dad

If you follow my blog, you know that I have been struggling with the grief of losing my dad three years ago today to pancreatic cancer.  We watched as the pain, medication, and the cancer stripped my father of everything he valued until all that was left was his struggle to survive.


On the morning of his death he woke up and said, "I am here, I thought I was gone."  Those were his last words, he died about an hour later.  Heart wrenching, even now.

I still cry about his death, he was 68, and not ready to leave this world.  I know it is cliche, but I am still angry about how he died.  Cancer is cruel.  I try to not to be get caught up in this cycle of anger and grief, but today it caught me as soon as I woke up and here I am allowing myself to feel the anguish of my loss.

Everything and the Basement Sink

Living in an old house has perks like tall ceilings, unique design elements, and the knowledge you are living someplace which has withstood the sands of time a little longer than you have.  However, there are drawbacks, creepy old basements come to mind.  Our house is no different.  From the low beamed ceiling to the uneven poured cement floor it is not an inviting space.  I go down there to do my laundry and scoop the kitty litter leaving quickly.  The basement looks like the a place where monsters and criminals lurk in the shadows waiting to jump out and get me.  I think I just spooked myself thinking about it.

The hot water to the washer has been out, in our quest to fix this problem, I dreamily said it would awesome if we had a sink down there.  My wife talked to our handy guy and viola we now have a utility sink in the basement just in time for Valentines Day.  We even got the deluxe model with the spray nozzle.  It is very exciting.  I can do hand wash in the basin and wash my hands if they get ucky.  I know you are giddy just thinking about my good fortune.  The position of the pipes required a height adjustment, so our handy guy built a pedestal for the sink.  How fancy is that?
﻿﻿
Our basement is still creepy.  No handy person can ever make it an inviting space, but hey I got a sink in my basement!
Posted by Tempest ina Pot of Tea at 3:06 AM No comments:

Marriage Equality and Degrees of Separation

Forever ago we bought a futon with a frame.  When we purchased it we decided to upgrade to a foam core mattress.  I have many regrets in my life, but this decision has not been one of them.  The futon has survived moves, break-ups, reunions, and much flopping on by various species of critters.  I think about three years ago, it became apparent the mattress had seen better days.  A memory foam topper has helped, but sometimes it truly is time to replace things.  So off to the Futon and Mattress Outlet to buy the replacement we went.  The intents was a quick drive by purchase.

The smiling, sixtyish salesman was waiting for us as soon as we cracked the door. "How can I help you?" he said.  Within five minutes he has sold us what we wanted and we were checking out.  Plan working well, and then he started talking about his grand dogs.  Before I could intervene Natalie had her wallet out with her photos of our dogs on the counter.  Next thing I know we are in Cary's (and obviously we are on a first name basis at this point) office looking at not only the grand dogs, but his adult children as well.

With a flourish Cary said, "And that is my son and his partner, they are planning a big wedding next year in Iowa."  I must admit I paused, this conversation was not what I expected while mattress shopping.  Cary proceeded to tell us all about his son and future son-in-law.  It was obvious that he thought the young man was pretty spectacular. He even shared how proud he was that the partner had been promoted to a manager with Sam's Club in mid-Missouri.

Again, I had to pause, my sister works at the store.  I had to tell Cary about my sister and we speculated if they might know each other, later sister confirmed that they did.  We had a small world moment and continued for some time to converse about the politics of Missouri and our shared hope for approval of same-sex marriage.  In all it was an unexpected and heartwarming conversation.

Reluctantly, it became time to gather our mattress and go.  After Cary had the box in the car, he said, "I knew you would understand about my son because I saw your sticker."  He pointed at my proclaimed  "Marriage Equality" on the bumper (http://tempestinapot.blogspot.com/2012/08/source-instagram.html).  "Would I prefer my son to not be gay?" he continued.  "Yes.  It makes it harder for him, but I have known since he was 2 he was gay.  He is happy and that is all that matters to me."

We left and it made me smile thinking again about all the hope I have for the future of the LQBTQ community.  We are your sons, daughters, mothers, fathers, brother, sisters, friends, co-workers, customers, and humans.  We are all connected and together we will make a better world.  Who knew buying a futon mattress would be such an affirming moment?
Posted by Tempest ina Pot of Tea at 10:26 PM 3 comments: