Rainbows Save the Day

I came out as a lesbian in early 1985.  When I say came out, I mean I fell in love with a woman and acknowledged that I identified as a homosexual.  Those early days we shared this information with very few friends and even fewer family members.  As our relationship became more known we were disowned by family members and had our lives threatened by those who did not accept us. 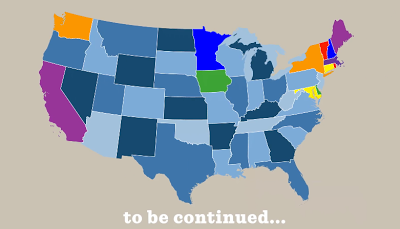 In time we moved to a large urban area and began being more open with those close to us.  We joined Queer Nation, Act Up, and the Pride Committee.  We protested and walked in Pride Parades proclaiming, "We're here, We're Queer, Get Use To It!"  We watched our friends die from AIDS and made quilt blocks to commemorate our fallen brothers.

More people knew about our relationship and slowly more people accepted us.  Our families started to bend and recognize that this was not just a phase.  We saw the world changing and slowly we began to hope.  Hope that one day our lives would be common place and mundane.  We hoped, but I never thought this day would come.  The day our government actually said we deserved "equal dignity."  Today DOMA (Defense of Marriage Act) was overturned by the highest court in the land, the Supreme Court.  The federal government is finally on our side.  A great rainbow shone over our land. 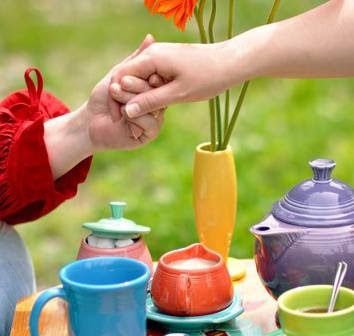 I am reminded of one of my favorite bible stories.  The story of Noah and his ark full of animals saved from the great flood..  A rainbow appears as a promise and the book of Genesis says, "I do set my bow in the cloud, and it shall be for a token of a covenant between me and the earth. And it shall come to pass, when I bring a cloud over the earth, that the bow shall be seen in the cloud... "  My friends the marriage war is not over.  Cloudy days may come, but that rainbow will be there and my government has made a covenant to treat same sex couples with "equal dignity."  My world just got brighter. 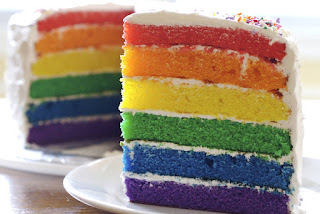 Posted by Tempest ina Pot of Tea at 11:29 PM No comments:

Today is my father's birthday, the third one since he died in 2010.  I have been trying to focus on the good memories, but with losing my cat yesterday I feel a little melancholic.  Okay, a lot melancholic.  Things have improved so much in my life in the last 6 months, I wish my dad was here to share in my good fortune.  I am sure he would have loved calling me everyday and asking if I was on my way to jail. The silliness would have fueled many corny exchanges.  I miss that.  Things are better in my life, but can I just say on this day there is much emptiness in my life.  Friends do me a favor show your love ones how much you love them.  In the end the love is what you remember. 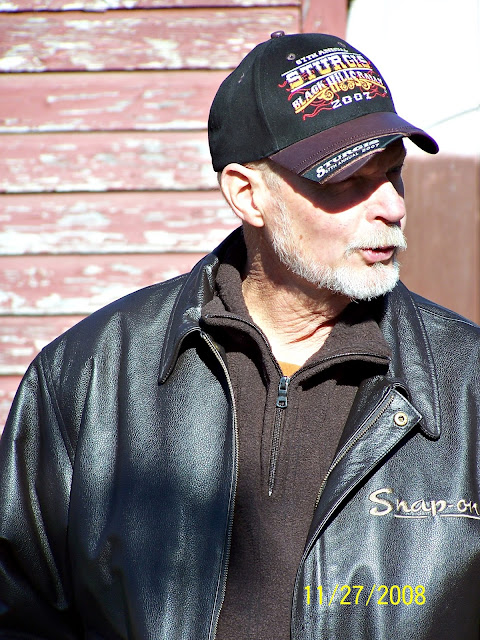 Posted by Tempest ina Pot of Tea at 5:56 PM No comments:

I never intended to love this cat.  Natalie rescued him, not me.  He was one step from being feral when he arrived.  It took time and tough love to civilize the cat whose previous name had been Juvenile Delinquent.  A big house and 7 other kitty siblings helped make him a good fit into our home. 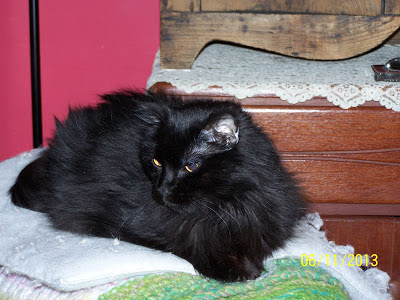 Yes, I said 7, which means he was cat number 8.  He won me over with his bad boy charm, mischievious pumpkin colored eyes, and love of chin rubs. I must have won him over too, because he never warmed up to Natalie or anyone else for that matter.  In fact he found biting Natalie to be one of his favorite activities after eating treats.  He didn't like company, dogs, or the great outdoors.  However, he was a one person cat and I was lucky to be that person.

Today I had to make the hard decision to let him go.  He will be much missed and my house seems very lonely without him.  I can only be thankful for all the love he has given me over years. Good-bye my Dante.
Posted by Tempest ina Pot of Tea at 12:49 AM 1 comment:

Two things on the list of things I love are having pride in my queer life and knitting.  Put those two things together and what have a got?  I have two new Pride knitting projects. 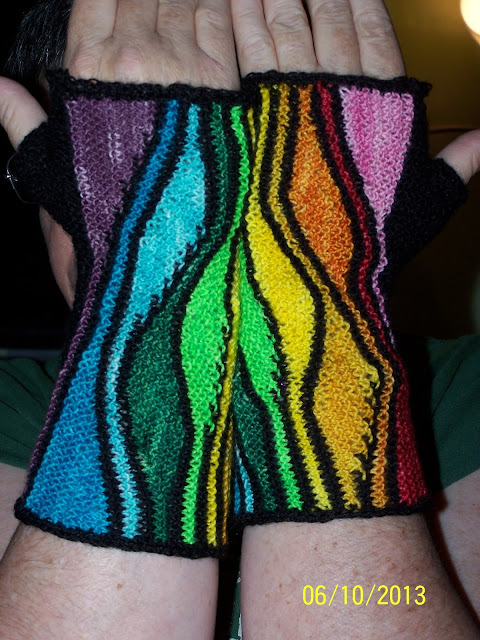 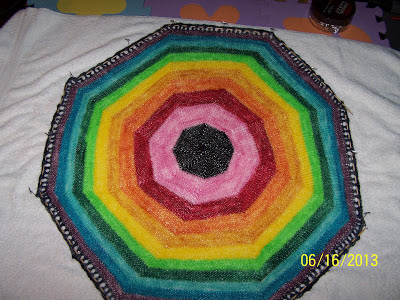 Second, with the leftover Dyeabolical yarn I embarked on a pinwheel pattern to see how much I could get with the scarps.  For awhile my knitting could have been a purse, a hat, or doily, but in the end it was an antimacassar.  Do you know what that is?  Stealing from wikipedia, an antimacassar is a small cloth placed over the backs or arms of chairs, or the head or cushions of a sofa, to prevent soiling of the permanent fabric. Originally, that was macassar oil doing the staining, hence the name.  No one in my home is into macassar oil, but whatever it what my knitting wanted to be.  I loved the end product and I think my chair looks prideful in it too. 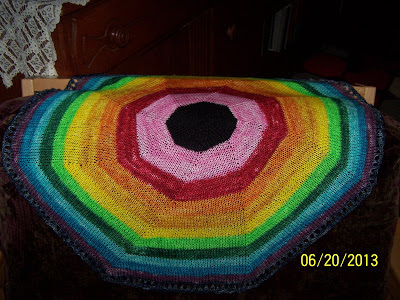 Posted by Tempest ina Pot of Tea at 11:54 PM No comments:

The good people at UPS showed up today with a delivery from Newell, West Virginia.  In case you are wondering why packages from West Virginia are so revered, it is because that is the hometown of the Homer Laughlin company.  In other words the new Fiestaware color has arrived!!!

﻿﻿ Back in early March Homer Laughlin announced the new color would be Lapis.  As I opened the box with my new place setting in it I was unsure exactly what the color would look like.  However, I had previously decided to go forth pre-order and wait for the big reveal.  Today my wait was over.  I pulled out the pottery and lo it was good.
Back in the 90s there was a limited edition sapphire Fiestaware color released for Bloomingdales.  I had suspected the lapis would be close in hue.  Though the lapis is slightly lighter in saturation it is very close to the sapphire.  I do like the color, I just wish it was a more vibrant.

Regardless, I always love getting Fiestaware in the mail.  The lapis will look very nice with the flamingo and lemon grass dishes  I definitely see purchasing more lapis pieces to join my ever growing dinnerware collection.  Call me obsessed, it is okay, and so true.
Posted by Tempest ina Pot of Tea at 10:42 PM 1 comment: 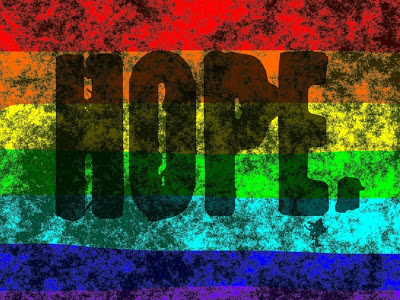 June is Lesbian/Gay/Bi-Sexual/Transgender/Questioning Pride month.  This month will also be an important month for LGBTQ rights.  Just in case you have missed it, late this month the Supreme Court will hand down their decisions on the California Proposition 8 and the federal Defense of Marriage Act.  If these two discriminating laws are overturned, my life will be greatly changed.

After spending thirty years of building a life with Natalie I am hopeful.  Hopeful our union will have the protection of other marriages.  I fear losing our home of twenty years if something were to happen to Natalie.  Any family member could challenge my right to live in our home or I will be hit with inheritance taxes a legally recognized spouse would not have to pay.  We could even be barred from attending the other's funereal.  We have spent a significant amount of time and money to protect ourselves, but it could still be a struggle.  We can only hope for the Supreme Court to recognize the discrimination against same-sex couples and end it.

I keep thinking things can change, love will win over bigotry and discrimination.  Society is changing.  Judges and politicians are listening.  People are recognizing all we are asking for is to have equal rights; rights our constitution is suppose to protect.  My hope is we end up on the right side of history  We are humans and we deserve the to be recognized as a loving married couple.  Pride month is about hope and I have hope.
Posted by Tempest ina Pot of Tea at 11:10 PM No comments: