One of my favorite things to do on Monday night is knit and watch Top Gear on BBCA.  I really can't explain it, but I will try.  I am not a car girl.  I bought my last two cars without even cracking open the hoods to check out the engines.  If you started to compare the merits of Toyota to Chevy, I would probably stare at you blankly.  However, Monday nights I rush to be in front of my tube just in time to see what craziness is going on across the pond.  These guys do the stupidest things with cars, things that make me laugh, things that make me wonder how these men made it to middle age.  They push campers off cliffs, ride vespas across Vietnam, and cause general mayhem wherever they go.  I can't wait to see what stunt will be on next.   It truly makes no sense to me.

I have described the show as Master Piece Theatre meets the three stooges.  I think the key is the British accent.  Somehow, the accent makes the show funnier and more intriguing.  Why would Brits want to trash vehicles in ridiculous displays of idiocy?  I mean, parking a truck on the roof of a sixty story building that is about to be blown up just to see if the vehicle will still run once it is dug out of the rubble, is insane (the truck drove away).  I am often dumbstruck by the things they get away with each week. I find this show and Parking Wars to be my two favorite things to watch while I knit.

The rub is though the American version of Top Gear on the History Channel is not much different, I just don't like it.  The presenters are uninteresting and obvious hipster dudes in love with how cool they are.  And you know they don't have British accents.  Apparently, I prefer goofy, middle aged, British guys talking about cars, not the dude that could be sitting at the next table in a restaurant talking about his weekend 4 wheeling.  Presentation is everything.
Posted by Tempest ina Pot of Tea at 9:47 PM No comments:

I have always loved the poetry of John Donne.  For some reason the last couple of days I keep thinking about his imagery of the compass.  For him the compass represented his love for his wife and how though he was often parted from her, they would always be connected like two legs of a compass with one head.  I know it is terribly sexist, but her leg was the stationary one and his leg of the compass was always in motion.  The image remains for me one of the most beautiful things one spouse can say to another (accept maybe John Cash in I Walk the Line).  Read for yourself and see what you think. 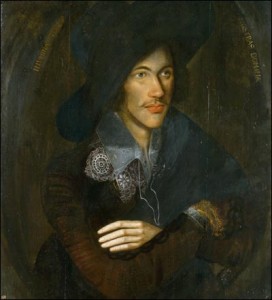 A VALEDICTION FORBIDDING MOURNING.
by John Donne
AS virtuous men pass mildly away,
And whisper to their souls to go,
Whilst some of their sad friends do say,
"Now his breath goes," and some say, "No."
So let us melt, and make no noise,
No tear-floods, nor sigh-tempests move ;
'Twere profanation of our joys
To tell the laity our love.
Moving of th' earth brings harms and fears ;
Men reckon what it did, and meant ;   10
But trepidation of the spheres,
Though greater far, is innocent.
Dull sublunary lovers' love
—Whose soul is sense—cannot admit
Of absence, 'cause it doth remove   15
The thing which elemented it.
But we by a love so much refined,
That ourselves know not what it is,
Inter-assurèd of the mind,
Care less, eyes, lips and hands to miss.   20
Our two souls therefore, which are one,
Though I must go, endure not yet
A breach, but an expansion,
Like gold to aery thinness beat.
If they be two, they are two so   25
As stiff twin compasses are two ;
Thy soul, the fix'd foot, makes no show
To move, but doth, if th' other do.
And though it in the centre sit,
Yet, when the other far doth roam,   30
It leans, and hearkens after it,
And grows erect, as that comes home.
Such wilt thou be to me, who must,
Like th' other foot, obliquely run ;
Thy firmness makes my circle just,   35
And makes me end where I begun.
Source:
Donne, John. Poems of John Donne. vol I.
E. K. Chambers, ed.
London, Lawrence & Bullen, 1896. 51-52
Posted by Tempest ina Pot of Tea at 10:30 PM No comments:

A Tisket, A Tasket, A T-Shirt Basket or Market Bag 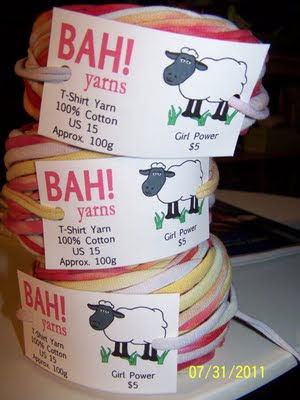 On the yarn crawl a couple of weeks back we fell in love with this upcycled t-shirt yarn we bought at BAH! Yarns in Washington.  Natalie and I thought we would both do a knit along with the yarn.  Well, that didn't happen. Natalie is deep in knitting vintage acrylic yarn into "tushie cushies" for her dogs.  I wanted a quick knit so I decided to make mine.  I followed the pattern and was surprised to find that three spools was not enough to finish the pattern.  I modified the pattern, and though I liked the basket, it wasn't quite what I had in mind.  I swiped Natalie's spools and tired again.  I made a smaller basket/bag which I liked much better.  I gave Natalie the first try basket and kept the second round market bag for me. 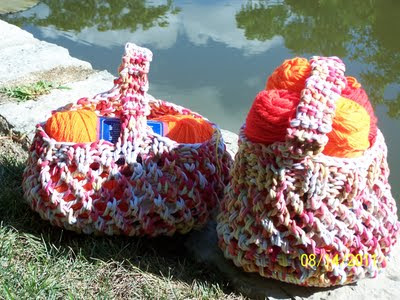 I really do love the idea of making yarn out of old t-shirts, I googled "t-shirt yarn"  and found several links as to how to make your own yarn.  I liked this one ( http://www.craftpassion.com/2009/05/recycle-tutorial-making-of-t-shirt-yarn.html ).  I think this yarn would make great bags and rugs.  The yarn is a little hard to knit with, I would use slick needles.  I also found dpns to be really impossible to use with this particular pattern.  Circular needles are the way to go.  So to the t-shirts in my my wardrobe I say beware of an upcycle.
﻿
﻿
Posted by Tempest ina Pot of Tea at 12:09 AM No comments:

Tonight a group of us got together at a local coffee house, Shameless Grounds (http://shamelessgrounds.com/ ) for a R-rated fiber group.  Many from my knitting tribe showed up, and several new fibernistas joined as well.  It is always exciting to meet new people, but to meet people who share a common interest is extra special.  I have found in these networks of people not just great teachers, but a network of amazing men and women who have helped me with more than just a few dropped stitches.  If you knit, crochet, needlepoint, spin, or just like to fondle fiber, you should look around and find your tribe.  Most yarn stores have an open knit night or day.  Shameless Stitching meets the second Monday of the month from 6:30 till 9:00 know you will be welcomed.
Posted by Tempest ina Pot of Tea at 12:00 AM No comments:

Scrappy Bag, Warning This is a Very Knitty Post 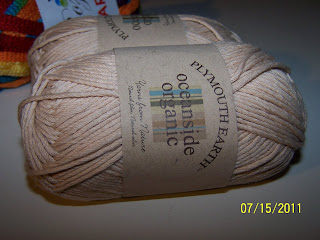 I have loved the Plymouth Earth, Oceanside Organic yarn I used to knit the yoga socks.  The yarn and the pattern made a very soft, but elastic fabric.  I had two small balls of yarn left over and wanted to knit something fun out of the leftovers and decided a small bag would be nice. 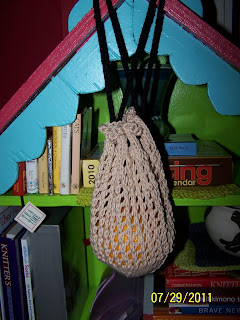 With my limited amount of yarn I cast on 60 stitches on 3 size 6 dpn.  I knitted about an inch and then did a double yarnover after the 5th stitch and a knit 2 together after the double yarnover.  The next round I opened the yarnover making it just one stitch.  I knit for about another inch and then I did the classic knit 2 together yarnover combination for a row and followed it with a knit row until I had the length I wanted. 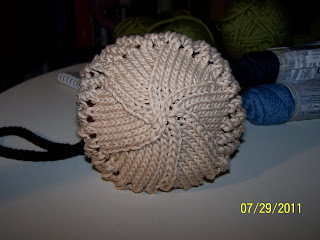 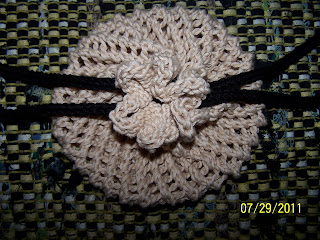 I have found that bamboo I-cords make the best drawstrings because the slide very easily.  I made approximately a 24 inch cord and double threaded it through my eyelets and knotted the ends together to give it a good closure.  I think if I had more yarn I would have knitted another inch on the top so the it had a taller opening.  In the end I had a 4 inch tail, so I was sweating having enough yarn on the bottom, but the goddesses of knitting smiled on me and I have a great bag for carrying fruit to work.
Posted by Tempest ina Pot of Tea at 12:03 AM No comments: