Connecting with Lars and the Real Girl 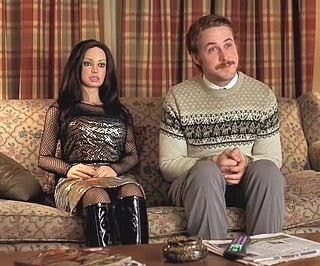 Sometimes I am surprised by a film that totally charms me into loving it when I thought it was the last thing I would ever enjoy. Lars and the Real Girl (2007 ) turned into such a film. I was grazing on cable for something to be background noise while I worked on my current knitting project. This film seemed the least offensive thing to have drone on in my front room while I knitted and purled my way through a clapotis (http://www.knitty.com/ISSUEfall04/PATTclapotis.html ). Funny at some points I had to remind myself to actually knit. I loved the film so much I picked up a copy from the library and watched it again on Friday night.

Why did I love this film? First I thought it would be a salacious story about a man and his Real Doll (http://en.wikipedia.org/wiki/RealDoll ) or "love doll" as they are sometimes called. In fact the relationship between Lars and Bianca, the doll, is complex and touching. Second, the story is quirky and unique. I was not sure what was going to happen next and was able to allow the director to take me on a sweet cinematological journey. In many ways the film reminded me of my all time favorite television show, Northern Exposure, touching and thought provoking with a smattering of humor thrown in for good measure. Without divulging too much of the plot, point number three, Patricia Clarkson as the amazingly pragmatic country doctor. Her understated guidance is the backbone of the film. I actually wish I had broken down and seen this film sooner and I am on the prowl to get my own copy. 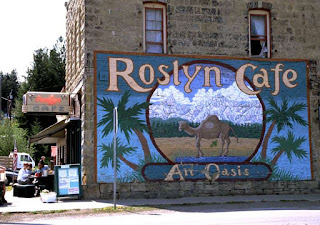 Oh and let's talk about the knitting. There was lots of knitting. The film is set someplace cold and rural which required lots of scarves, mittens, tams, and sweaters. The main character, Lars, lovingly wears a baby blanket, knitted by his mother, around his neck like a scarf. One of the most touching scenes of the film features Lars surrounded by community matrons knitting and doing needlepoint as they try to comfort him. I don't know if it was the knitting or the content of the scene, but I did sniffle a little. I did just want to sit and down and join those ladies in a moment of community connectedness.
Which brings me to the theme that always sucks me in, connecting. Lars is just like the rest of us trying to connect with a world that sometimes seems strange and disconcerting. Funny, I can relate to that point. Why do you think I take the time away from my knitting to blog?
Posted by Tempest ina Pot of Tea at 9:01 PM